Last week I completed my first ever Mud Run.   It will forever be known as the coldest day of my life.

The Dirty Girl Mud Run is a 5k course with 10 obstacles ranging from the H2OMG to PMS (Pretty Muddy Stuff) and proceeds benefit the National Breast Cancer Foundation.  It is an untimed race meant to be fun, empowering, and inspirational to everyone who participates.

Four of my best girlfriends - Mary, Bridgette, Jill and Liz - and I registered about a month before the event and began planning for the race.  We took the 8am "wave" since Liz needed to get back for a Rehearsal Dinner, so we knew it was going to be an early morning.  The race was one hour away (or was supposed to be) and we needed to be there an hour early (the registration said) so that meant leaving my house at 6am.  No problem.

A week before the event the temperatures were downright HOT reaching nearly 80* some days.  I think I even quipped about having to break out the flip flops to go to dinner one night.  However on February 14th - two days before the Dirty Girl Mud Run - Mother Nature pulled a fast one on us and temps plummeted into the upper 30s.  Thanks for that Mother Nature.

We met at my house at 5:45am.  All half freezing to death.  It was still dark outside.  The temperature was 44* with drizzling rain.  There was a North wind blowing about 30 miles per hour.  It was awful.

We took two cars and I was in the lead.  As I was barreling down I10 a flock of birds decided to kamikaze into my car.... Mary yells "Bird" - I hit the brakes - but it was too late.  Feathers. Everywhere.  I have never hit an animal with my car in my life... until Saturday.  NOT how I wanted to start my day.

We got to the exit where the race was and like the website instructed I took a left off the interstate... about 6 miles later I realized the directions were probably meant for someone coming the other way, so "left" should have been "right."  At this point we are already 10 minutes late.  We turn around and head back, when Jill pulls up Google Maps on her phone and it tells us to take a right at the next intersection... 2 miles into a residential farming community we finally stop to ask for directions.  Thanks Google Maps. Apparently their "right" really means "left."

Are we having fun yet?

We finally arrive to the Mobile Fairgrounds over a half an hour late.  Thankfully we were five of the few who were taking the first wave and were easily registered, got our swag and T shirts, and spent a few minutes bouncing around trying to get our blood unfrozen in our veins.  The car said it had warmed up to a nice 46* at this point. Ugh. 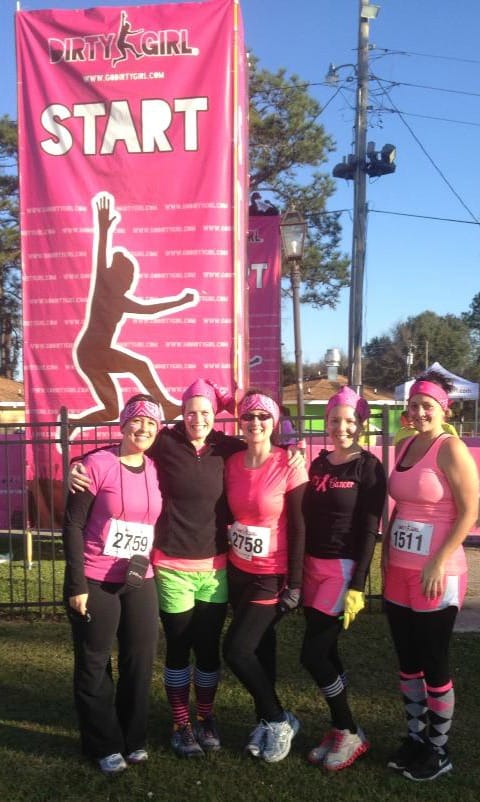 We lined up at the start line and when the whistle blew we all kinda looked at each other.... are we REALLY about to do this?

The first obstacle was easy... and DRY.  A huge blow up wall you crawl up and over.  Easy.  Obstacle #2 however was trudging through probably 6 feet of knee deep water.  Now, there were not ice cubes floating in it, but it absolutely felt like their could have been.  After that we had maybe 1/3 of a mile to walk in 35mph wind with the bottom half of our legs painfully cold.  I think all of us were looking for any reason to quit at that point.  There is crazy and then there is stupid... this was border-lining on stupid.

By the time we got to the third obstacle I think delirium kicked in and we were all laughing and chattering hysterically as we crawled over this cargo netted obstacle thingie... thankful that it too was dry. The five of us trudged through seven more obstacles - most of which were more muddy ice water than mud - laughing hysterically, cussing Mother Nature, and coming up with new explicative adjectives for cold weather.  Now, I know to some of you right now 46* would be a heat wave... but until you have spent an hour - WET - climbing obstacles in 46*with a strong North wind.... I dont wanna hear it.   Thankfully I took my Pami Pocket along for the race to carry my iPhone which had a Lifeproof Case on it (waterproof) so I was able to document the entire occasion... 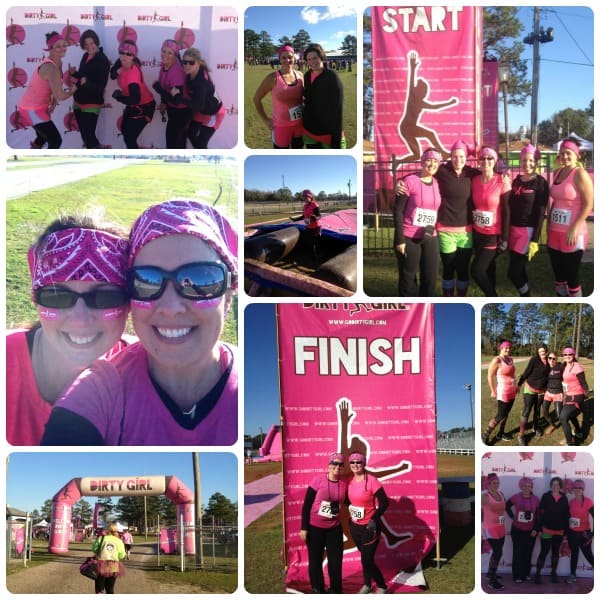 All in all the race was fantastic - even as painfully cold as it was.  We all had fun, we all laughed, and it made for a day none of us will soon forget. If you are going to run a Mud Race though, we have a few suggestions having "been there, done that."

1. Do it in the Summertime. Trust me when I say even those who do not like the heat - you would much rather be hot and muddy than freezing and muddy.

2. Do a later "wave."  Since we were the very first group to go, we got mostly muddy water to tromp through - as you can tell by our "after" pictures where we all look pretty remarkably clean.  In fact when we posted them to Facebook, the ONLY comments we got were "where is the mud?" - the same question we had wondered all day.

3.  Take a waterproof camera.  Now, these are not all of the pictures I took from the race, but I wont bore you will ALL of them.  The Dirty Girl crew does have cameramen on site, and even the spectators were toting great cameras... but there is nothing like documenting the stages you go through trying to make it through this course.  I really should have taken video. (PS - I loved that my PamiPocket kept my phone, money, and ID safely attached to me for the whole race.)

4. Wear a bandana.  That sexy headgear of ours wasnt just for looks.  (that's sarcasm people)  Those bandanas came in handy with both wiping our faces and keeping our hair out of the water and mud.

5. Regardless of the weather - just have fun.  You know, we really could have let the weather ruin our day.  Heck I think ANY of us were looking for any hint from the other to just back out entirely.  By the time it was over Liz's lips were turning purple and in the changing station we all remarked how our legs were so cold they had that feeling after an epidural where you can feel pressure that you are touching them, but all feeling was gone.  But we had some great laughs, we all "bonded" through our joint insanity, and have made a pact to do another Mud Run in May when the temperatures are more reasonable before writing them off completely.

After the race instead of hanging around to party we jumped in the car and headed to Cracker Barrel to warm up.  (What a motley crew we looked like walking up in there muddy, cold, and exhausted with all of our Dirty Girl gear still on)  Hey, you are supposed to "carb load" after a race, right? 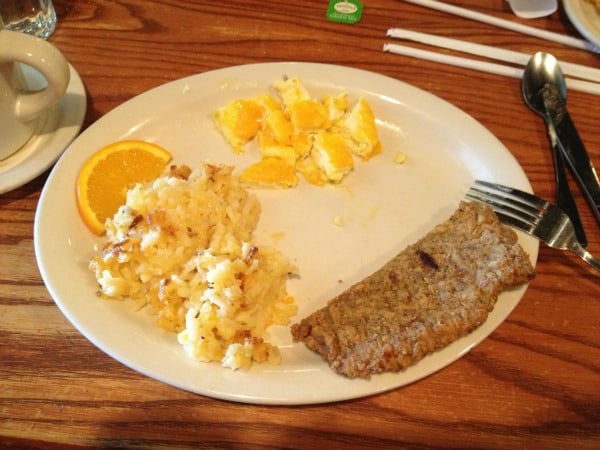 Whatever.  We call it Comfort Food.  And after a morning like that, we all needed it.