As you may recall, back in January one of my Party Plan Divas kinda "called me out" on one of our live Conference Calls on "BOLD" Goal Setting by asking me what one of *MY* Bold Goals were for 2013.  On the spot I said that I wanted to complete twelve 5k races and then have a quilt made with all 12 race Tshirts.  Well, I am almost halfway to my BOLD Goal!  So far in 2012 I have completed:

This month I am actually participating in two 5ks - making up for April when I was out of town so much I wasnt able to get a race in.  Most of my normal Running Crew had plans for this weekend so I enlisted the support of a few new gals - all of which are excited to join the regular Crew and participate in seven more runs this year.   I couldn't be happier. 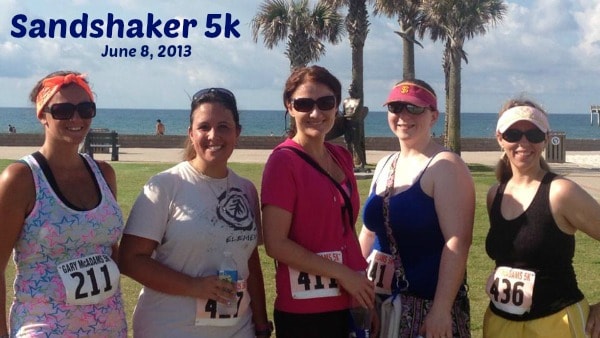 Now, this 5k was a bit different than the last four.  For starters, this was a "normal" 5k - no water, no mud, no costumes, no color, no obstacles.  Just a beautiful 3.1 mile course on beautiful Pensacola Beach.   The weather was absolutely perfect - around 85* with a nice breeze off the Gulf of Mexico.  Also, since I am still having trouble with my knee since slipping in the MudRun, four of us registered as "walkers" instead of "runners" - a choice we would soon regret.

See, the basic rules of races is that Runners can walk, but Walkers cannot run... this is for safety I think.  And turns out I was the only one who knew that rule.  But I chose to be a Walker to really see how my knee would do for another 3.1.  Yes I have been walking/jogging the neighborhood... but not near as much as I should have been.

Jill on the other hand was determined to beat her time and do the run in under 30:00.  I am happy to announce that she accomplished HER BOLD Goal coming in at  29:35.   Way to go Jill! 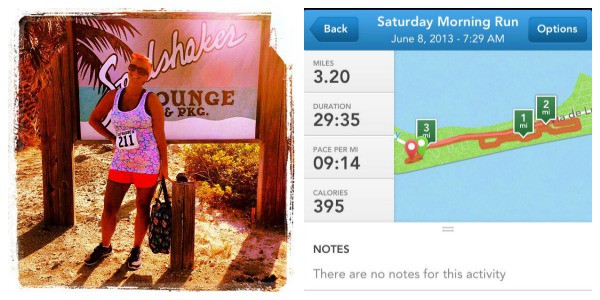 The other four - myself, Jaimee, Amy and Amber - lined up... last.  On purpose.  See they let the Walkers start 2 minutes later than the Runners so we don't get trampled, and since this was their first 5k and my knee was hurting before we even began, we decided to just get in the back.   We weren't in it for time - just wanted to complete it and have fun on the beach with friends.

To make a long story short... no one.... NO ONE wants to WALK for 3.1 miles.  By the time we turned the corner to start heading back to the finish line, we were discussing if we would actually get in *trouble* for running ... at least just a little bit.   I don't know if we were just finally warmed up, if we were just over it, or if the promise of a Bushwacker at the end gave all four of us the desire to break into a run.. but we all wanted to.  BAD.

However... we did not break the rules.  We did not run, or jog, or even Prancersize, although we did get a few good laughs at the idea of doing so.   We sped up our walking - realizing quickly that the women who speed walk in our neighborhoods are not in fact purposely swinging their hips like that, but on the contrary it is pretty much impossible NOT to once you pick up the pace a bit.

We finished the 5k in less time than we expected - incidentally NOT in last place as we blew past a few dozen with the promise of Bushwackers getting more and more appealing - and all vowed to never be "Walkers" again.  It was a great race, and absolutely the most beautiful setting, and I was so glad all five of us got to spend a few hours together hanging out, and accomplishing a goal - together.

It's funny how we have "limiting beliefs" that hold us back in life and in our goals. Jill had run a few times that week and not broken 30:00 all week, and she ended up not only breaking it, but with time to spare.  I thought for sure I was going to have trouble even walking the 3.1 with my knee, when in truth I was dying to just JOG... at least for a little while.  Jaimee, Amy, and Amber also thought they would struggle with a 5k, having never done one before, and they all surprised and impressed themselves that not only did they finish, but they too wanted to run.  Our fears were all in our heads, and we all left there holding our heads a little higher, knowing we could accomplish way more than we believed.

That in itself was worth every step we took.