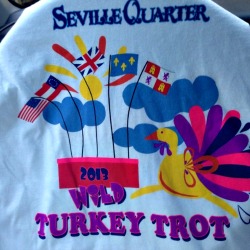 Well... I am on the home stretch... and thank God for that.  For those of you who are new to MoscatoMom, I set a goal last year to complete TWELVE 5k runs this year as part of my "BOLD Goal" series with Party Plan Divas. (side note: I am NOT a runner...I discovered this after setting the goal) BOLD Goals are all about breaking those "SMART" Goal rules (specific, measurable, realistic, blah blah) because they are devastatingly boring and I think Goal Setting should be fun and exciting.  I was very optimistic when I decided on a whim to complete twelve runs this year and all I can say... is I have sure learned a lot along the way.  In case you want to catch up -

Like Run #8 I convinced Mike and Cayce to run with me.  Even though I really want to be left alone when I am trying to run through nearly debilitating shin splints, I do like knowing that I have friends in the crowd suffering with me... or at least there are people there to carry me to the car... 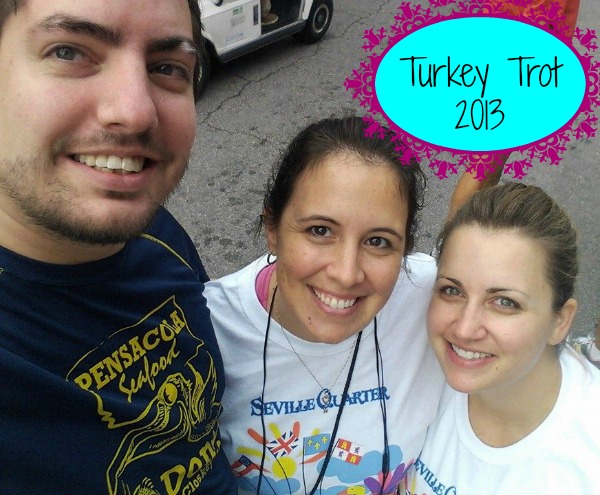 The run began a few minutes late because they had to "change the route" last minute.  Now, this doesnt much matter to me (three miles is three miles...right?!), but I saw a few people look less than pleased at the news.  I would soon understand why.  However once the National Anthem was sung and the horn blew - off we went...

Now... let me backtrack just a bit.  Run #8 - the Don McCloskey 5k - was in the beginning of September. I beat my own best time by seven minutes.  It was fantastic.  I ran good, I felt good, my shin splints somewhat behaved... it was amazing. In September.

October I was gone most of the month.

Here we are at the end of November... so you see where I am going with this?

So the horn blows and off we go... for about a half a mile - if that. And then it literally felt like my legs were breaking off at the shins. I wave to Cayce to keep going. Mike slows and I told him to stay with Cayce.  I slowed to a walk - people whizzing past me. And then the self bashing kicks in.

"You knew you weren't going to be able to do this Lynsey."

"You have a legitimate excuse for not making your goal this year."

"Those are not shin splints - they could be bone spurs... or the doc even said hairline fractures."

"WHY do you keep putting off the Xrays."

"What if you are doing more harm by continuing to push this?"

About that time I saw a lady off to the side... stretching out her shins. Our eyes met with a smile and I said "shin splints?"  She said "oh my gosh I have been battling them for months - I thought they were supposed to get better over time!!"

So the rest of my run was spent with this lady who I have never seen before - and haven't seen since. We laughed at ourselves through the pain of our shins, the ailments of getting older, and why-does-our-butt-still-jiggle-like-that-after-this-many-months-of-training. We ran some, we walked some, we "trotted" mostly. Kind of a half walk-half run-on our toes thing.  We probably looked ridiculous but we looked ridiculous together and it got us through. The "new route" had us winding through neighborhoods of Downtown Pensacola - streets with very old pavement and potholes... those were fun to dodge. We finally crossed the finish line - my seven minutes lost from the last run made up - and then some.

I found Mike and Cayce and we all had the exact same thing on our minds... 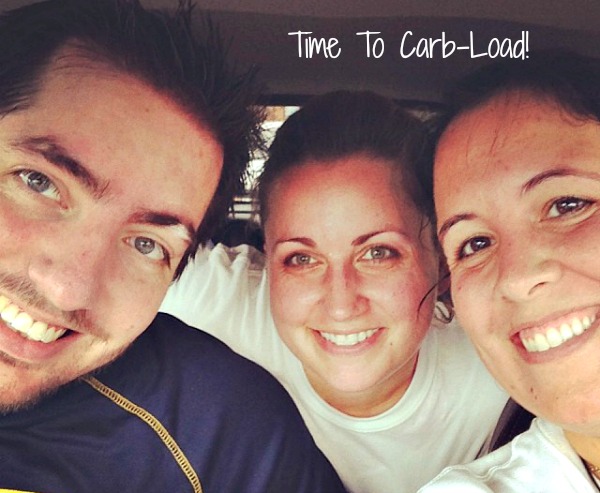 We headed off to breakfast - not even staying for the after party.  We were all over it.  As we drove away - more than 20 minutes after I finished, I saw more people still crossing the finish line. I may have been way over my time from before, but it made me feel great that I wasn't as close to the end of the pack as I thought I was.

Cayce beat her best time, as did Mike.  I was just happy I didn't quit at the one mile marker and let them come get me. I made a new "friend" that I helped to encourage and she encouraged me - laughing at our common ailments.  I vowed to stretch more at the next run - which was the very next weekend.  I vowed to rehab my shins all week.  I vowed to stop talking so terribly to myself.  Well.. three out of four ain't bad.

I finished.  Slow. Hobbling. Cranky. But I finished.  And honestly, THAT is all that really matters.