This shop has been compensated by Collective Bias, Inc. and its advertiser. All opinions are mine alone. #InsideOutEmotions #CollectiveBias

When I chose to have my girls seven years apart, it was purely for selfish reasons. I knew that I could not handle juggling two little ones at one time. I have all the respect in the world for moms who have their children close in age - I did not have enough faith in myself to do that. People asked me all the time "Aren't you worried they won't be close because of their age difference?" Nope... these two have been the best of friends since day one, and while they may get in to their little spats from time to time, within minutes they are piled up giggling together again. 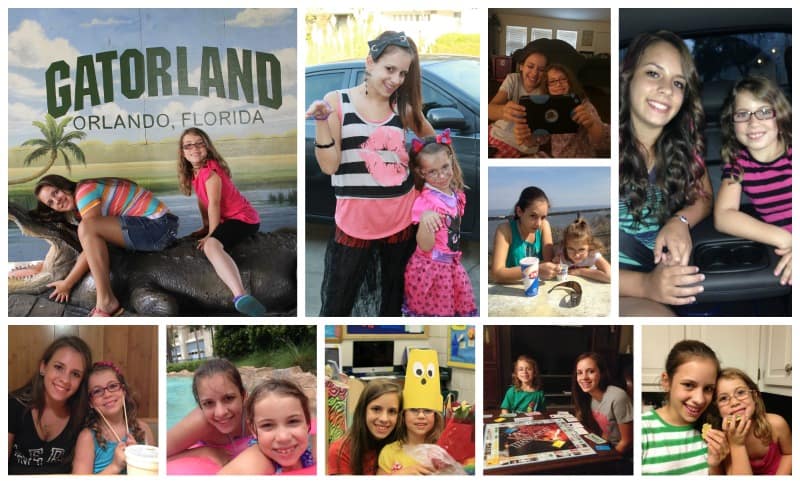 This weekend we went and saw the new Inside Out Movie for our family date night. The movie is super cute, but really showed how emotions can change with age. It spawned a conversation about how even though my girls are the best of friends, they see and feel things vastly different because of the seven year gap. We even got as far as talking about the little spats that they get in to, and how sometimes it has to do with the emotions of a situation being different. The Teen is obviously more mature and has a wider range of emotions, while Midge is still figuring things out. Then we talked about how sometimes it's hard to explain to someone what's "wrong" because you can be wrapped up in so many emotions at once, you can't put it in to words, so you may be acting one way, but actually feeling another way. "It's like we need flash cards or something," The Teen said with a laugh.

It made me think of the new Inside Out Plushes that are on sale now at your local Walmart. They are the perfect visual "flash card" to help the girls understand how each other is FEELING - even though they may be ACTING a different way. The Teen pointed out that sometimes when she is feeling sad, it makes her really angry - so she can come off as being grouchy, when really all she wants - and needs - is a hug. With her "flash card" idea in mind we went straight out and purchased all five Inside Out Plushes - Anger, Joy, Disgust, Sadness, and Fear. We found the display right on an end cap in the toys section. In fact there were all kinds of cool Inside Out toys there. I think Midge played the Musical Bing Bong a dozen times. 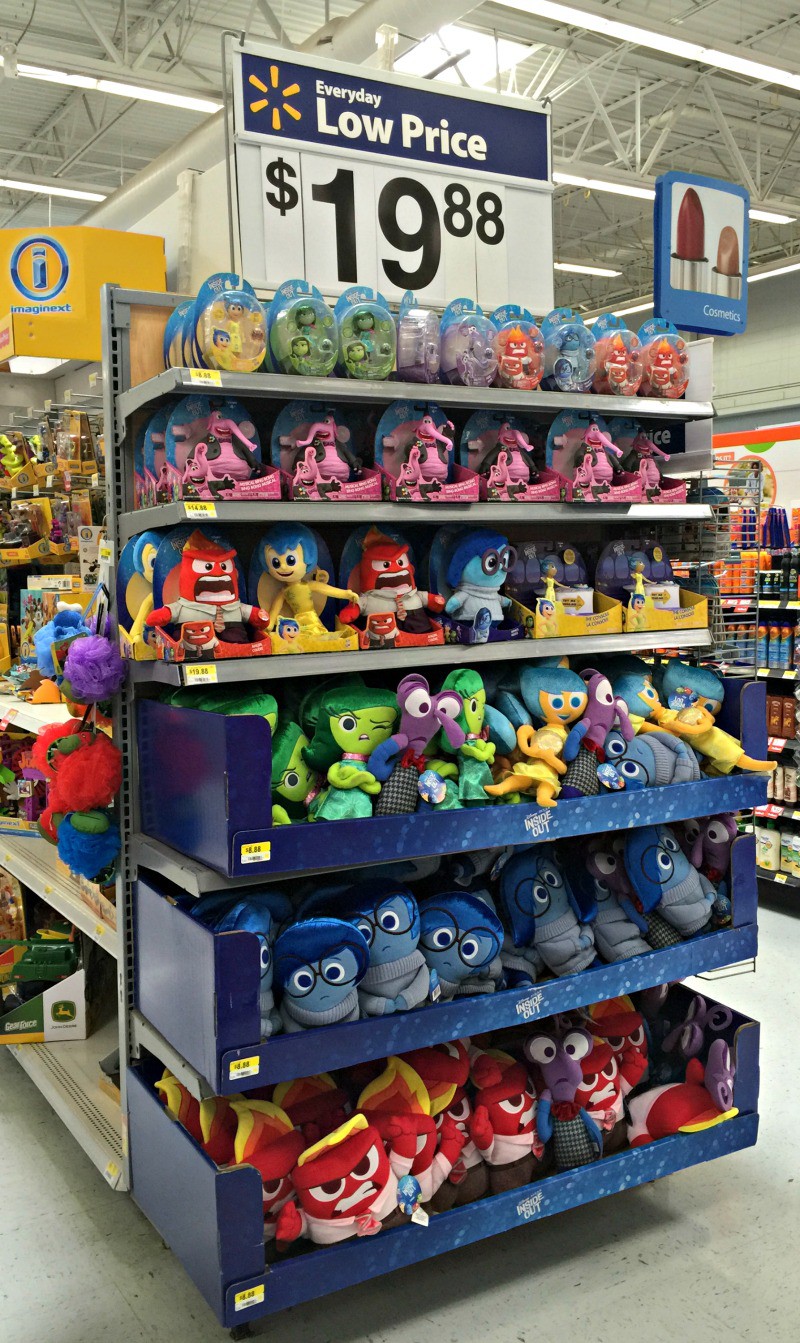 Then I needed to make a Bedside Plush Holder that the girls could hang right on their bed, so when a spat comes up they can easily grab one of the plushes to show how they are feeling. I didn't want these guys to just get tossed on the bed with every other stuffed animal. I also didn't want to spend a fortune or have something so complex that I would get frustrated and quit. I decided to use an oversized bath towel as my base, and includes colored washcloths to match the emotions colors to decorate. You can literally pick up everything you need for this entire craft from your local Walmart. 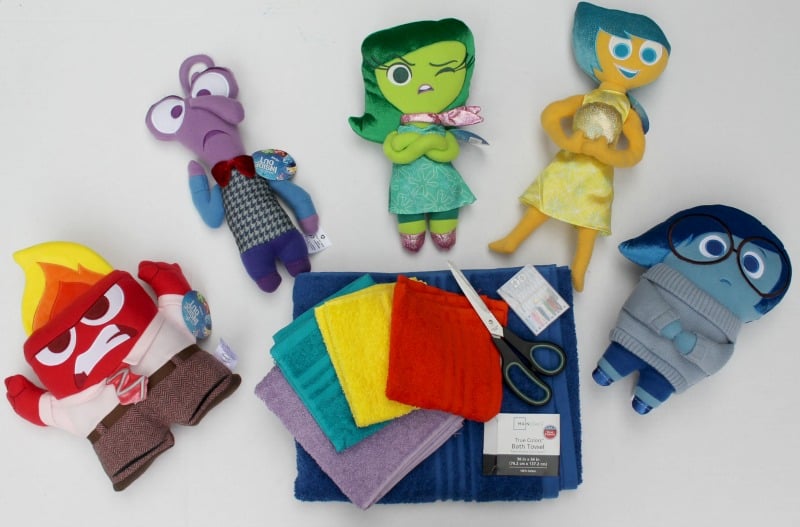 The first thing we did was cut the circles out of the colored washcloths. In the Inside Out Movie, memories are kept in what looks like "bubbles" so I thought the little bubbles of color would be a perfect way to decorate the Inside Out Plush Holder. I used one of my canning lids to draw out the circles and then cut them out using nice sharp scissors. 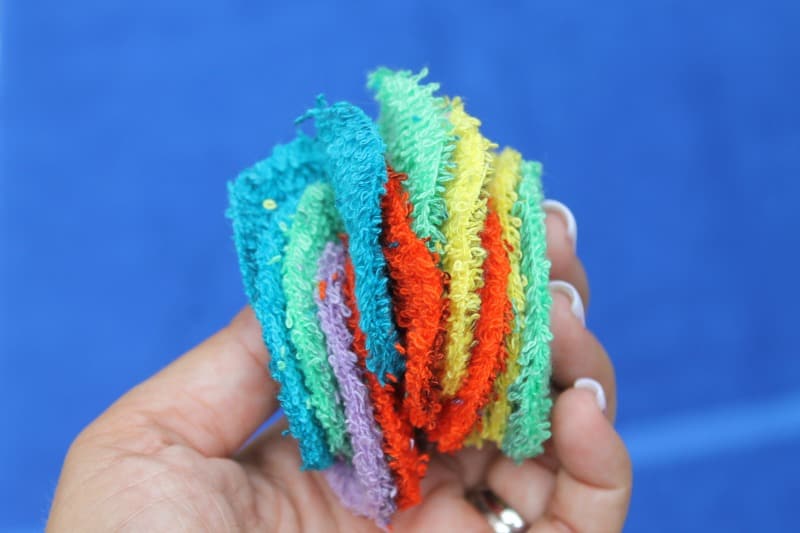 Next we folded up one section of the towel to make the pocket. I folded it about 12 inches up and hand sewed the side tightly. Now, you are probably thinking this would be much easier with a sewing machine... and it would have been. Except that I was only a stitch or two in before the conversation about emotions started up all over again. I realized I was glad for the time that it took to sit there and hand sew while talking to the girls about how we feel, and things that are going on in their lives. It was absolutely joyful. 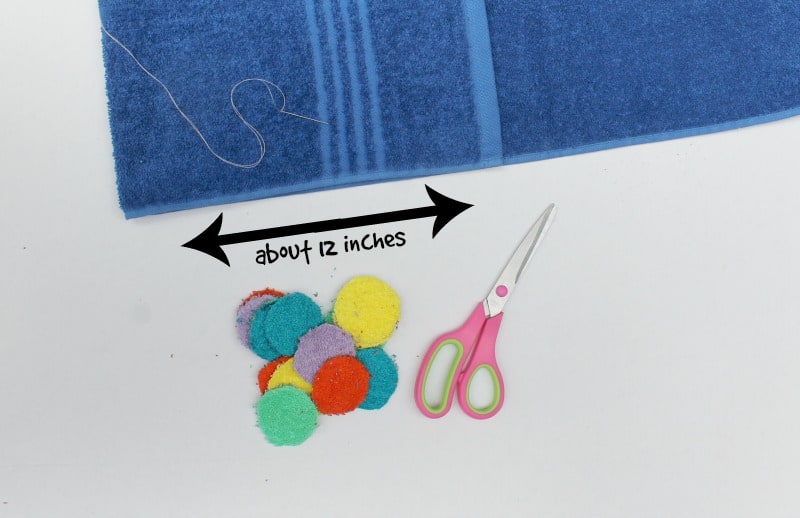 Next we began putting on the circles - or Memory Bubbles as the girls called them. I managed to table my OCD and let Midge not only do most of the sewing, but I let her place the circles as well. We did a starburst like stitch - criss-crossing in the middle but keeping close to the outside so the fabric wouldn't roll up. 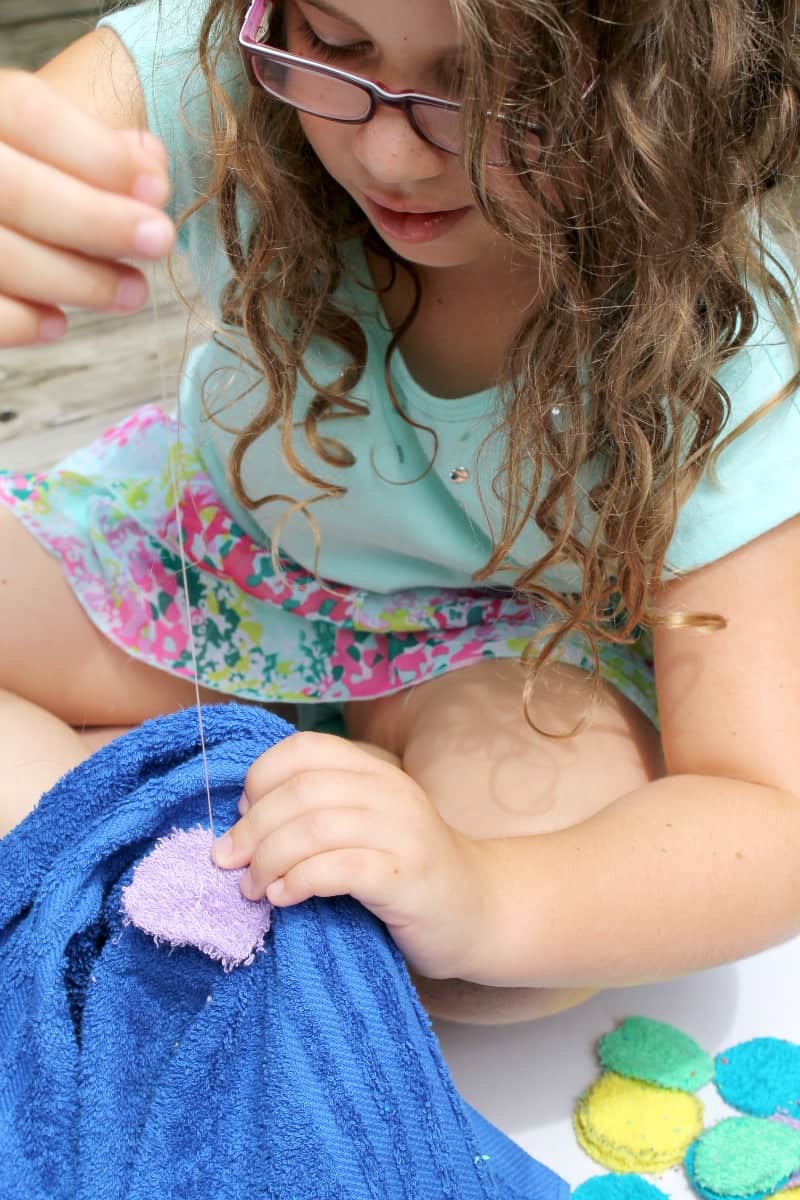 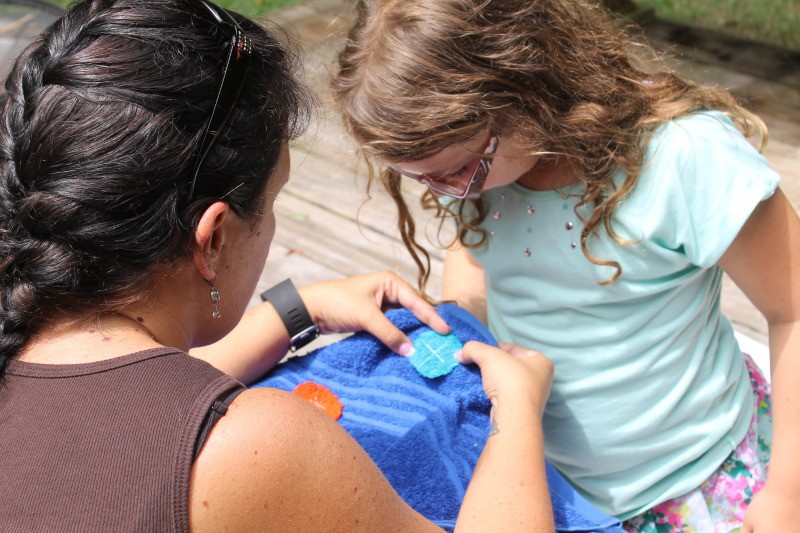 The Teen helped me by threading the needles...  swear those things have gotten tinier... it couldn't possibly be that my eyesight is dwindling... right? 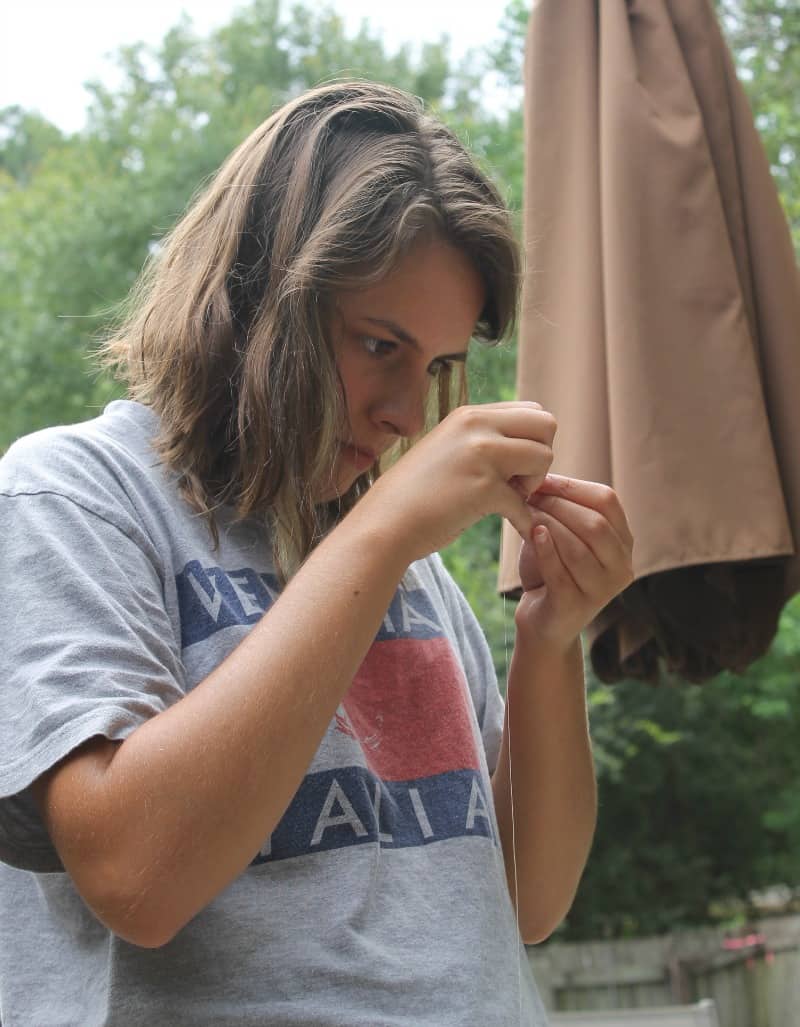 Once she was satisfied with how the bubbles turned out, I stitched up the other side tightly, and then put a single tight line of stitching up the very center to make sure they stayed upright. The key to doing this with a towel we discovered is a nice tight stitching - especially at the top corners! 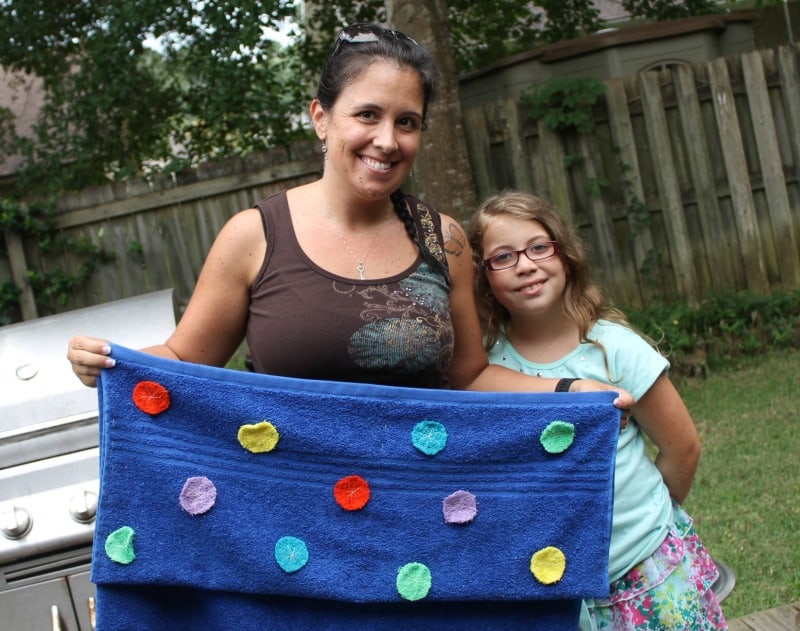 To hang the Beside Plush Holder you simply slide the long part of the towel under the mattress that you want it to hang from. Since the girls have bunk beds we decided to hang it from the top bunk so they can both easily reach. Make sure you spread the towel back and out as far as you can - that will help the holder hang upright when the weight of the plushes is added to it. 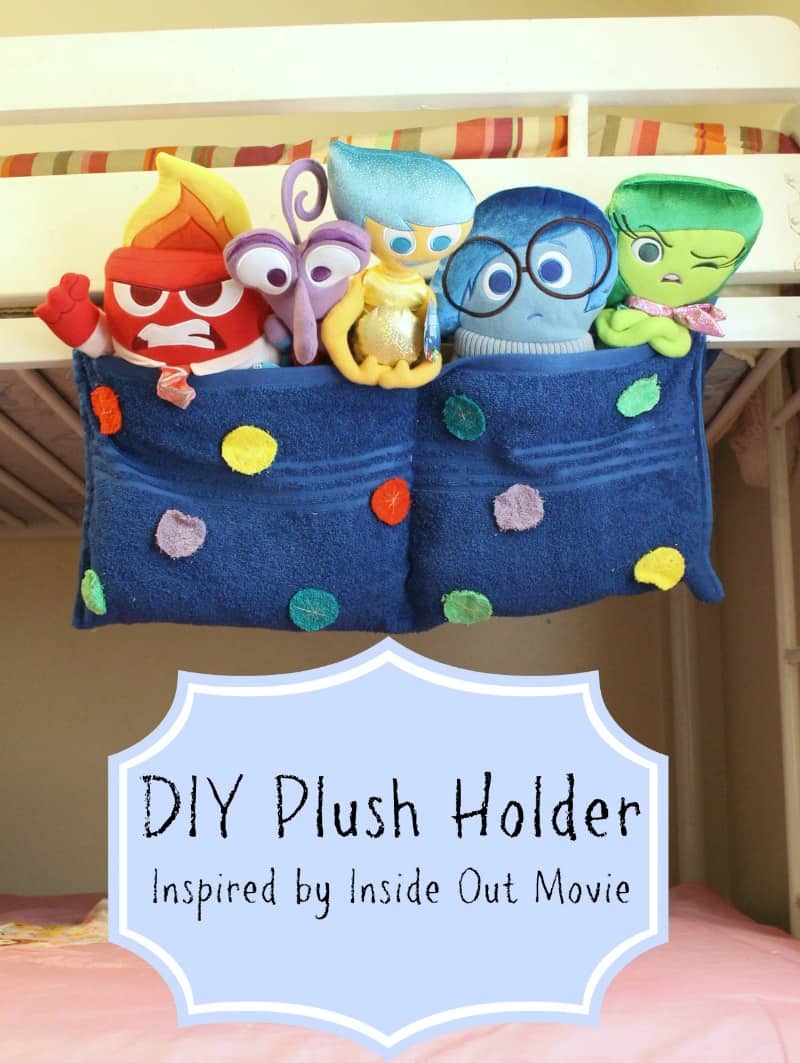 We had an absolute blast putting together this craft and just spending time together doing something fun. And I think we all got a better understanding of how we feel about certain things, and talked about how it was ok to feel when you feel - and to talk about it and not keep it bottled up inside. I think the most important thing though was when The Teen said "You know the movie made me realize things just aren't so black and white - there is so much more going on." Then Midge chimed in with "and sometimes something can be happy for you, but makes someone else sad. You have to be careful not to hurt their feelings." We all just looked at each other and let that kind hang in the air for a minute and smiled. It was perfect. 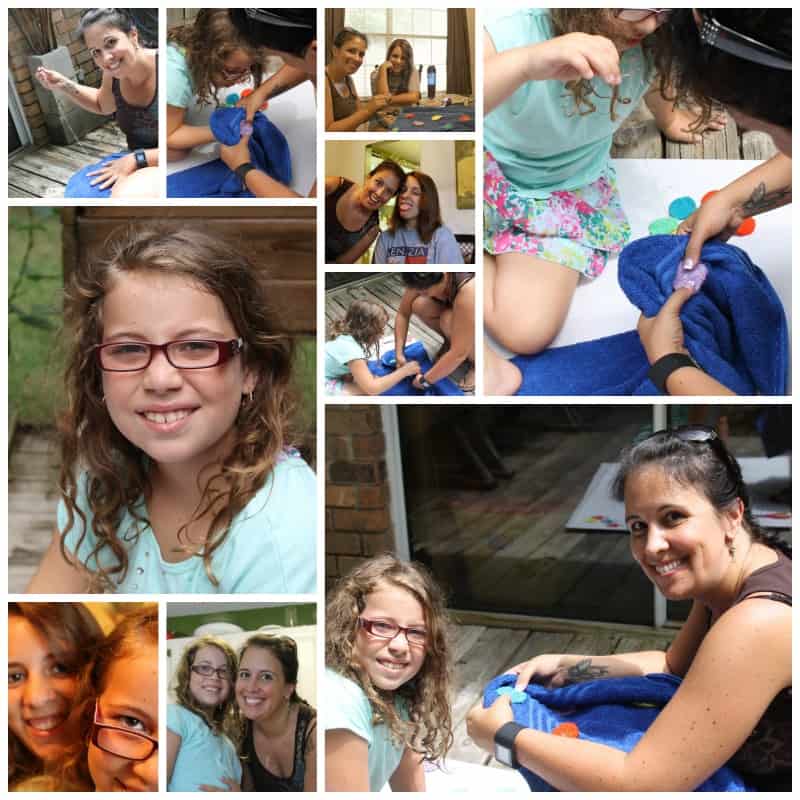 How have you helped to explain emotions as your children have gotten older?