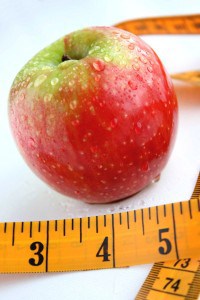 Since beginning on the journey of Eating Clean this year, I have run across many conversations where the "jist" is that as long as you are eating healthy, clean food - you can just about eat as much as you want.   I understand the concept - putting good stuff in opposed to bad stuff will help your body run better- but I still wasnt seeing the results on the scale that I was hoping for by cutting out all processed food and not drinking any wine (or alcohol of any kind).... that is until this week.

Last Thursday I went to hang out with my friend Trisha just to get out of town for the day and have some much over due "girl time."   It was a relaxing day of walking around furniture stores and pet shops - me still trying to convince her that a ferret is a better pet for her daughter than a hamster.

We got on the subject somehow of weight and food that we eat and such and Trisha said - "I cook enough food for two people - and then divide it between the three of us."   I thought it was crazy since I have been cooking for my family of four for years now.  If it's chicken - four chicken breasts.  If pork - four pork chops.   I mean... there ARE four of us, right?

There are two adults, one preteen, and one child.  That DOES equal four PEOPLE.... but not four SERVINGS.

So starting the very next day - Friday - I began cooking for three people.   I gave Mike his portion, Sami her portion, and then I split the third portion in half and shared it with Taylor.  I also cooked two sides - but only enough for ⅔ people.  (i.e. one can of corn and one can of green beans)  We divided the vegetables up evenly.

Here are the results -

First off, no one went hungry.    When I changed the portion size I thought for sure we were all (wait - Taylor and I) were going to starve to death.  We havent. In fact I have felt comfortably full, and Taylor has happily finished her whole plate with the family, instead of taking forever.   Mike also hasnt been tempted to "help Taylor out" by finishing off her leftover portions.

Speaking of leftovers - there haven't been any.  There also hasnt been any waste.   Normally if I cooked and entire bag of chicken, we would have 2-3 breasts left over - IF we did not over eat and stuff ourselves with a second helping at dinner.  Now I only take out three pieces, and put the rest back into the fridge.  This week Mike and I have been having those "leftover" breasts for lunch the next day instead - saving us from eating junk food our going out to a restaurant to eat.

I also also excited that our garbage disposal hasnt gotten a work out this week.  When I was over-cooking, we would have a lot of left over waste.  Which is not only disheartening - but EXPENSIVE!  No wonder I was spending a fortune at the grocery store - I was throwing 30% of it AWAY!

My grocery bill / restaurant bill has been cut nearly in half.  I admit one of the "benefits" to working at home and being your own boss is getting to go out to eat for lunch wherever and whenever you want to.  However eating out for lunch every day is as hurtful to your wallet as it is to your waistline.   We have pretty much eliminated the need to go out to lunch since I can just pop the "leftover" meats on the grill,  and since now one package of meat lasts two meals instead of only one, my grocery bill is lighter.

But here is the biggest part.... I lost five pounds.   In five days.  Five pounds.  That's like a pound a day.

There are all kinds of tools to help you with portion control - decorative plates that tell you how much to fill with which food group, fancy schmancy food scales, "snack bowls" that are no bigger than the palm of your hand.... and they are all great.   However, if you are like me - feeding a FAMILY with even one young child, and need something just quick and easy that you can begin implementing as early as dinner tonight... just simply make one less serving.

Now that I am doing this, its seems like such a "no-brainer" but it took someone actually saying it out loud for it to click.  Even though I had been feeding my family healthier food, I was still overfeeding us all.   I will never cook four full portions for my family again.... or at least until Taylor is old enough to actually need a full portion... you know, when she is thirty.