This past Saturday I completed the McGuire's 5k Run - the third run of my "12 5ks in 2013" goal.  Today is the first day since that I have not felt sore.  The McGuire's Run is known for being the hottest after party of any race on the Gulf Coast, and myself along with my two besties decided to test this knowledge along with 17,000 other Pensacolians..... seriously.

Though the race was fun, the weather was perfect, and I laughed until my cheeks hurt, it is safe to say that this is one race that I will never participate in again.  In the words of Mel Gibson - "I'm getting too old for this shit." 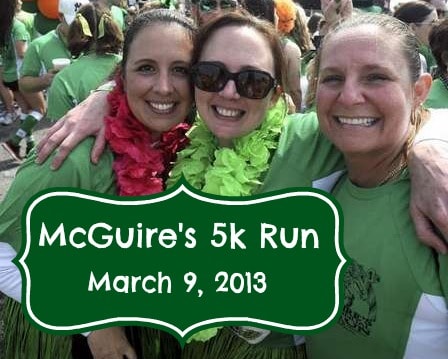 The morning of the race, Christy and Mary and I met at my house at 6am to drive my girls out to my Moms in Gulf Breeze.  It was freezing.  Not as freezing as it was the day of the Dirty Girl Mud Run, but still cold.  As we headed towards the Breeze we ran into traffic before even getting off the interstate.... over three HOURS before the race was to begin.  Not a good sign.

We were able to take a few back roads and finally make it to the bridge to get the girls delivered, only to hit the same traffic on the way back in.  We finally got parked though, put on all over our "gear" and head to the Pre-Party.

Let me stop here and tell you that I had heard there would be over seventeen thousand people there.... but I did not really grasp on to that until I was  in a sea of green that would last the next five hours of that day - getting increasingly more crazy as the hours ticked on.  If you have ever been in a crowd of seventeen thousand people - you get it.  If you have not, let me assure you that SAYING it, and LIVING it are two entirely different things. 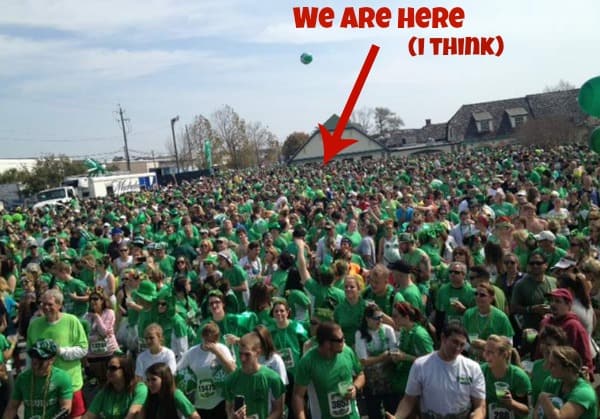 Then add on top of that - DOZENS of strollers.... yes, as in baby strollers.  Now, I may not make a lot of friends by saying this, but the McGuire's Run is absolutely NOT a place for children. Even babies who "wont remember."  Besides the fact that its incredibly dangerous (runners + drinking heavily + baby strollers = rrriiiiggghhhhtttt) its beyond annoying to have to play Frogger between the strollers while trying to run a 3.1 mile race that has narrow passageways anyway.  Christy was hit with a stroller in the ankle hard enough to draw blood - and that was before the race even began.  And to add insult to injury - the "mother" didn't even apologize.... Mary and I kept each other from getting assault charges.

When it was time to line up for the race we made ourselves right at home... alongside the 3,000 Marines stationed here who were running as well.  Hey, we have to show our support for our country right?  And besides, what better motivation to keep your butt running than a Marine Corps Cadence!?  AmIright!? 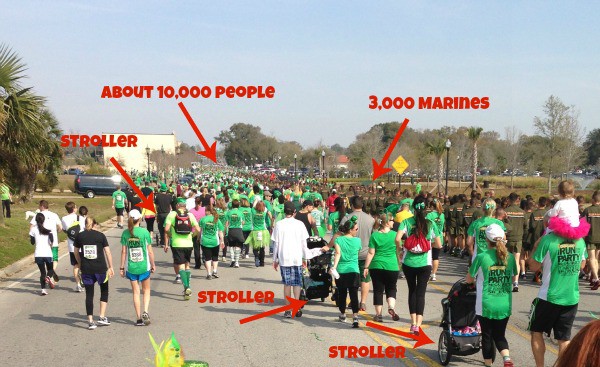 Besides the strollers and my shin splints - both equally as annoying - the run went really well.  It was a slow start with nearly 17,000 people crossing a start line, and Mary and I were so ready for it to be over that we actually forgot to cross the finish line - we went back to make sure we crossed it later... after we had an Irish Wake in hand... you know... we were parched after all that running. 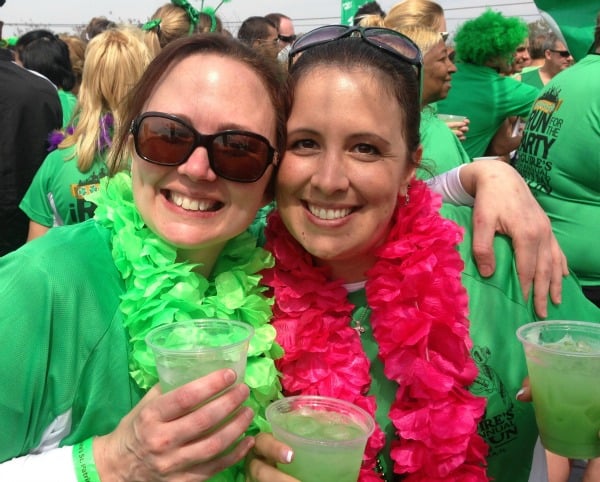 They served us something-stew which I was hungry enough to eat, despite my being squeamish about meat.  The rolls however were amazing and went well with... well, more Irish Wakes. 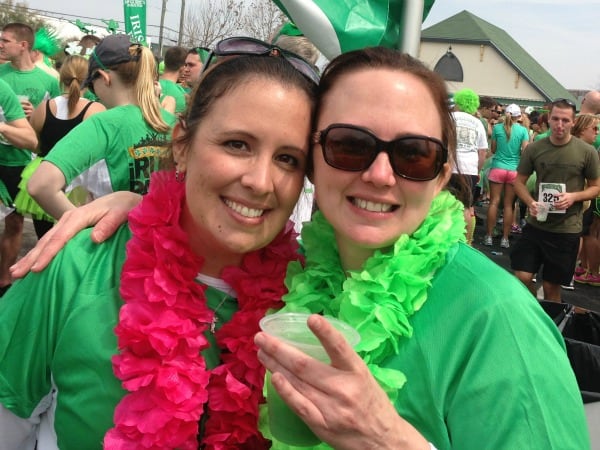 With 17,000 people you are bound to make new friends... especially when hovering close to the Irish Wake tables.  Did I mention those were free?  And that we were parched?  And that by this time it was hot?  And that they taste really good? And.... sorry, Mom. 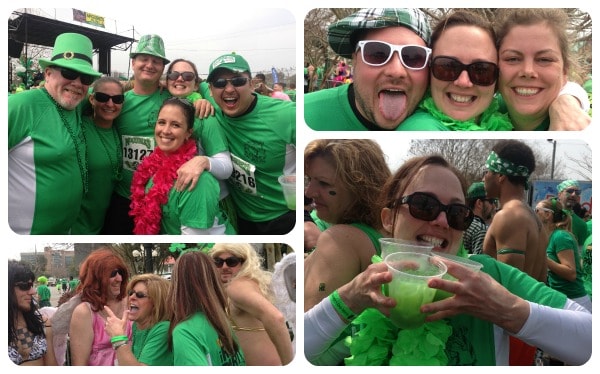 Needless to say when you take three wine drinkers and give them unlimited free liquor, you are GOING to end up with a party.    I am reminded however why it is that I only drink wine now, and even that only on occasion...

I am glad to have the experience now of having done a McGuire's 5k, and checking my #3 goal off the list for 2013.  However I am looking forward to a nice, calm, "normal" 5k in April when I will be running for a charity that supports sea turtles... surely that after party has to be calmer... right??!?!