The hardest part of pet ownership is knowing they do not live as long as we do.  The pain that comes along with saying Good Bye to a pet is almost incomparable.  When I think back over my lifetime – as an avid pet lover, collector, and “rescuer” – I have shed more tears over the loss of a beloved pet than probably any of my lost human relationships combined.

Sadly, this weekend, I had to shed more of those tears, as we said our final Good Byes to our little dachshund, Rollie. 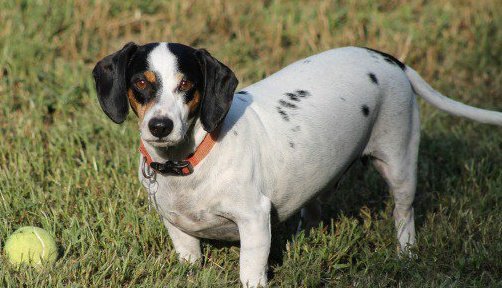 Rollie was Mike's dog for about a year before we met.  And in the beginning… well, Rollie and I were not exactly friends.  He barked (which I hate) and would growl at the neighbor dogs.  And when there was a thunderstorm he would freak out on a cellular level – panting, whining, crying, and insisting on being in someones – anyone's – lap until it was over.  He was a remarkably spoiled pooch – having lived first with Mike's Grandmother and then Aunt – both of whom treated him like 19 pounds of solid gold.  And I admit… it took me a while to come around.

He was painfully attached to Mike – insisting on sleeping between us in the bed, and would literally jump over me to get to Mike on the couch.  Any chance he got, he would get between Mike and I, and in the beginning I saw this as completely obnoxious.  It wasn't until a while later that I realized that Rollie knew what true, undeserving, unconditional love was, and he could give it effortlessly.  I learned it while, little by little… he began to give it to me – even though I didn't really deserve it.  And before long, it was my feet he was sitting on while I did my conference calls, my popcorn he was sharing on the couch while we watched movies, and me that he was walking with to the bus stop to pick up Midge.  Mike was his “person,” but over time, he let me be his person too.

Last Thursday night, while I was at the Mystic Stripers Mardi Gras Ball, I got a call from Mike that he was taking Rollie to the emergency vet – that something was very wrong.  I asked if I should come home, and he said no.   Now, I wish I had.  On Friday Mike took him to our regular vet, where he was diagnosed with Immune Mediated Hemolytic Anemia – IMHA – a rare blood disorder that basically causes the white blood cells to attack the red blood cells – literally killing them all.   They gave him meds and set an appointment for Monday morning.  However, Rollie would not make it to that appointment, as he passed away quietly and painlessly in my arms on Sunday night.

To say that we are all still reeling is an understatement.  For him to be perfectly fine on Wednesday – playing ball with Midge in the back yard – and then gone on Sunday is almost too much for us to wrap our brains around.   The fact that no one knows what causes IMHA or even how to treat it is hard to comprehend as well.   It has left us angry, confused, and just devastated at the loss.

It has been raining almost constantly since Rollie passed, and I find myself wishing he was here to pant and whine and drive me crazy just one more time.  I can not walk into the backyard because his tennis balls are still out there – right where he and Midge left them on Wednesday when I called them in for dinner.

I am not sure I will ever see another tennis ball or experience another thunderstorm without feeling the pain of our loss.   Even as I type this it all seems very surreal.   I am glad that I came around and thankful for the lesson Rollie showed me – that unconditional love can be effortless, and should not be something you are scared of – even if the person you are showing it to isnt exactly deserving at the time.   I will miss my “son” forever, my little heartbeat at my feet.  I only hope he knows now that I loved him as much as he loved me.