I hate buffets.  Wait, that's harsh… I am not a BIG FAN of buffets.  Maybe it is because every buffet you go to is a screaming depiction of obesity in America, or just the idea of food sitting out like it is in a trough for hours on end… see, I just turned green.

When Mike and I saw the advertisement for Chow Tyme opening in Pensacola – he began to smile as I turned a few shades of green.  However, I started seeing friends of mine on Facebook Checking In and say that it was really really good.  So tonight, after figuring out that I can not yet have groceries delivered in Pensacola yet, I asked Mike if he wanted to try the place out after picking up the Tween from school.  Of course he promptly hopped up ready to go.

We arrived a little before 5pm and the parking lot was already filling up.  The inside I must admit is VERY nice for a buffet.  I also like how you have to walk a bit INTO the restaurant before you are into the food – it is nice to get to order my drink before seeing people shovel food onto a plate.

The buffets are large and clean, and I have to say, everything tasted very very good.  There is a good mix of Asian cuisine, American favorites, seafood, and of course Sushi.   There is also a large dessert buffet which I managed to NOT indulge in.  (thankfully they had an apple pie puff pastry on the main bar *ahem*) They also had these cute little star cookie thingies… they look better than they taste … but they are are cute!

The Toddler enjoyed the American food – “chowing down” on fried chicken, mashed potatoes and corn on the cob.  She finished up with mint chocolate chip ice cream and washed it all down with a Root Beer. (does it GET any more American than that!?) The Tween on the other hand ate her weight in Fried Rice and Crab Legs.    Mike tasted several of the Asian entrees – impressed that the Peanut Chicken actually tasted like peanut butter.  I had a chicken breast and three helpings of Asian Green Beans, along with a handful of boiled shrimp.  I also tried their Loaded Potato, which was just this side of awesome. (But not “clean”) Someday, when I can eat carbs again, I will go back for another.  I was also totally impressed with their sweet tea, which to a true Southerner I could tell was ACTUALLY brewed and not “shaken.”  I looked at their Ranch Dressing which looked horrible, so that is one point against them, but since I am not eating ranch right now anyway, I will let is slide. 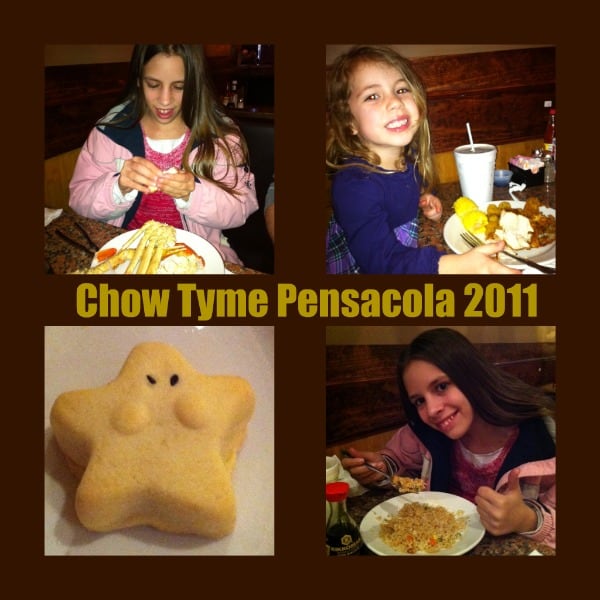 It was nice to be able to go to a restaurant with four VERY different appetites – one who was even watching what she was eating – and have everyone get their fill of exactly what they wanted.  The prices were very reasonable – especially for the quality of the food.  The servers were fantastic too – clearing plates quickly, keeping drinks full, and even trying to crack jokes in their best English… I have no idea what he was saying, but he thought it was hysterical, and I thought he was adorable.

All in all we were very impressed.  This is one buffet I will overlook my quirks in order to enjoy again.
Chow Tyme
6841 N 9th Ave
(the corner of 9th and Creighton – behind the old Sonny's)

*Disclaimer: I was not paid, endorsed, or asked to write this post… in fact Chow Tyme will probably never see it.  Just wanted to share my thoughts with my favorite Pensacolians.

« Do You Have Goal Jeans?
Children’s Car Wash – How Much Is Too Much? »