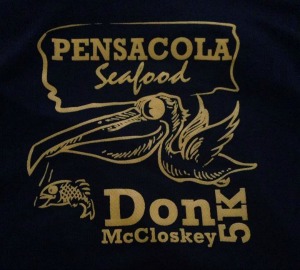 Yesterday I completed my BOLD Goal #8 running (and I mean really RUNNING this time) the Seafood Festival Don McCloskey 5k in Downtown Pensacola.  As with the first seven 5ks I have run this year to complete my BOLD goal of running 12 in one calendar year, I learned another lesson about myself and my habits... and not the good ones.  You can read about my other runs here:

With my hectic schedule over the last few weeks I registered for this one totally on a whim and at the last minute - literally the final day of registration.   Fearing I would be the only one running it from our little 5k Running Divas group I registered Mike.  I then convinced Cayce that it would be fun too... especially since she has not run an official 5k with us yet this year. 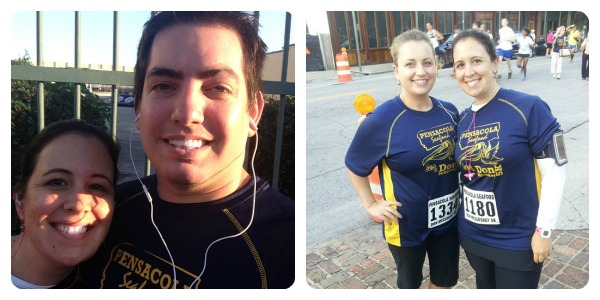 Honestly the day could not have been more beautiful.  The weather was a crisp 68* getting started but quickly warmed up to around 80*.  The sun was out and there was a great breeze off the water so it kept you cool the whole course.  We stretched and warmed up there in front of Seville, nodding and smiling to all of the other runners.  There is nothing like that mutual understanding and respect that is given to a whole bunch of people who wake up at 5:45am on a Saturday to run together... for fun.

We lined up around the middle - I knew I was going to get to run some of this one.  That was my plan anyway.  When the gun went off - so did we... and it felt amazing.  Running.  With runners.  REAL runners.  People who actually do this for real.  I had my iPod jamming away to "We Own It" - my favorite run anthem - and I just... RAN.

For almost a half a mile.

Now to "real" runners that is nothing.  But for me it was big.  Not to mention I had really pushed myself too far the day before when I was working out with Fred and my knee and shin splints got so bad I literally jumped off the treadmill.  On Friday I was fearful honestly that I wasnt even going to be able to finish the 5k on Saturday.  Even Fred wasnt real thrilled about the idea of me doing it.  But I have a *touch* of a stubborn streak... not to mention I set a goal.

When I slowed to a walk it was mostly due to my shins screaming, but also what previously had served as lungs, felt as if they had shriveled in to raisins inside my chest.  We rounded a corner and headed up to the Maritime Park entrance (which was uphill to my chagrin) but there was this glorious stretch of downhill where I totally used gravity to get me running again.  It was some time in this area that my RunKeeper App let me know my pace - which was way faster than any of my previous 5ks - which inspired me BUT I also had the thought "well of course, because I ran so hard at first - but I cant actually KEEP that pace for an entire three miles...."

And that's when things started going down hill.

Actually, the irony is that we were going back UPHILL on the course, while my thoughts and inner demons were taking me downhill. Cayce had already taken off ahead of me, and Mike had stayed back - to make sure he didnt need to pick me up off the pavement at some point.

The fodder in my head sounded a little something like this:  I dont think I can finish.  Why do I keep doing this to myself? 12 5ks in a year? Are you stupid!? You are not a runner, Lynsey.  You could quit.  You did hurt yourself yesterday.  No one would blame you for quitting.  And it isnt really QUITTING quitting.  You can just explain that your shins are so bad that you are physically unable to complete your goal.  Who can fault that?  Hell it may even be worse than shin splints, you have been putting off those Xrays for months. The OT lady mentioned "hairline stress fractures" - who can expect you to finish with those?  Did you really think you were going to be able to do 12 whole races in 12 months?  I mean... really?

That is the time the RunKepper App sounded off again... second mile... almost the same pace as the first. Whhhaaaa?!!?!?!?  You mean... I HAVENT thrown off the entire thing with this Second Mile From Hell where I was mentally beating myself to a bloody pulp?!!

I looked at Mike - "I want to run again."  He said "baby, do what you can - I am right here with you.  Set little goals - to the next car, to the light post - and just run when you can and walk when you can't. You will get there."

When RunKepper piped up one last time to give us our time finishing the third mile - meaning we only had .1 mile left - I was ecstatic.  I was WAY under my time.  I looked at Mike and he said "ready to sprint the rest of the way in?"  And we did.  Together.  I "let" him cross the finish line first because his only goal always is to just beat my time, but when I looked up and saw the clock as I passed it was hard to believe.

Six minutes I shaved off my time from my last "personal best" 5k run.  Six minutes.

Now, my actual time still isnt something to really brag about, but what surprised me so much was how much better I did than last time. I improved.  BIG TIME.  And that had me walking on air the rest of the day. 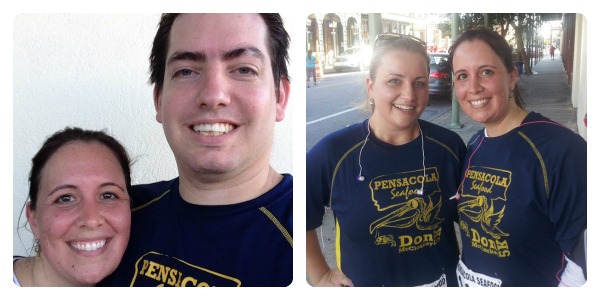 This run was so synonymous with so many other things in my life.  I started off great... and then I started getting resistance... so I beat myself up ...badly...and nearly quit... but I pushed through it (with the support of Mike and RunKeeper), and caught a second wind, and ended up blowing my own mind with my results.

It made me think of all of the other times in my life I have been stuck in the "Second Mile" - a time where I am struggling with some resistance, beating myself up, going through the motions, getting TOTALLY discouraged and wanting to just quit... and being completely unaware of the progress I was still making. See, even though my second mile sucked (and boy did it ever)  it didnt suck so bad that it blew the entire run. In fact I managed to keep a good enough pace that once I hit that third mile, I was able to still cross the finish line a full six minutes faster than any other race.

And it also made me realize that we should celebrate the PROGRESS over the RESULTS.  Truth is probably 1,000 people crossed the finish line before I did - including my two buddies I took with me.  But I crossed it faster than *I* ever have.  And that felt awesome.

As I sit here and type this - the morning after the run - I can barely move my body I am so sore.  I updated Facebook to say "the only part of my body not sore today is my eye lashes."  I am not kidding.

And it feels... AMAZING.