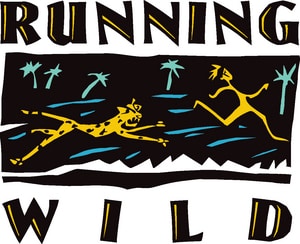 Last week after hitting a big milestone in my weightloss - my Pre-Taylor weight - I decided to reward myself with a new pair of running shoes.  I have whined about shin splints for months and have continued to try to just "run through the pain" pretty unsuccessfully.  Well... I am happy to report that my shin splints are a thing of the past!

Many times over the last few months I have been told what a huge difference the "right shoes" make when it comes to shin splints.  I have tried many different shoes - from Asics to Nike - thinking that I was doing the right thing since the label on the box said "running shoes."

My Dad suggested early on that I head to Running Wild, a local specialty store with a focus on fitness.   Since 2000, Paul and Cherie Epstein have been professionally custom fitting runners at all levels, and have now even expanded into a complete training, injury prevention and fitness resource.   You can also find a listing of all Area Runs - most of which I didn't even know existed!  I do not know why I resisted going - maybe out of fear that they were going to tell me I would never be a runner again - but as usual my fears were way worse than any reality and I am celebrating and singing their praises every day now.

When you go to Running Wild, one of their specially trained "analysts" will watch you walk barefoot in a straight line to measure your gait - looking in particular at your ankles, knees and hips and how they move.   I was fearful I would have to run for them - which I always feel awkward doing - so I was glad that this was an easy, no pressure test.

When I told my person that I was suffering from shin splints her first question was "how often do you wear heels?"  Well.... the only shoes I own that do NOT have heels were my current "running" shoes. After watching me walk a few times she measured my feet and asked what size shoe I normally wore.  When I told her she grinned - sweetly acknowledging that I had even gotten that part wrong.

She came out with three different pairs of shoes and helped me put each one of them on.  Immediately with the first one I could tell they fit much tighter than the others I have had.  Not uncomfortable - but more snug around the center of my foot.  The second pair felt like it came up higher on the back of my heel.  The third pair was really rounded on the bottom which reminded me of those Sketchers Tone things that feel like your own personal carnival ride.

I walked around for a few minutes in each, rocking forward and backward, jogging in place, asking different questions... and then I did what any girl would do.... 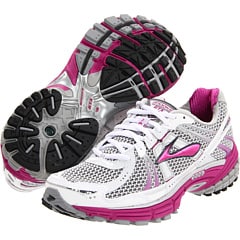 I chose the pink ones.

The "pink ones" are actually Brooks Adrenaline GTS 12 women's running shoes.  Now, obviously I don't know much about running shoes, but apparently these are pretty remarkable.  On the Brooks website the features are listed as:

This twelfth iteration of our most popular shoe is all about taking what’s great and making it even better. Adrenaline junkies can expect the same revered fit and feel with added upgrades like more mesh for breathability, a friction-resistance heel, and a crash pad that encompasses more strides.

I broke the shoes in just wearing them around the house for a few days, but on Sunday I put them to the ultimate test - hitting the treadmill at the gym.   I warmed up as usual - did some minor stretching and then the exercise bike.   When I climbed up on the treadmill I looked at Christy and said "Ok... here we go," stuck my headphones in .... and RAN.

It was amazing.  I can't even put into words how great it was to run without feeling like my legs were breaking.  I am sooo thankful that I went to Running Wild, and they took such great care of me.  My dream of being a runner again got a LOT closer this week, and I am so very excited to take on some races this year!