OK so Sunday was the Super Bowl... although after watching it, I am not sure anyone is going to call it "Super." I did not really care about the outcome of the game, nor was I very interested in the commercials, since all of the best ones had been purposely leaked anyway.  Knowing, however that it would be on no matter what in this house, I decided to take part in the Sweaty Betties SuperBowl Workout Challenge.  I mean... how hard can it be... right? 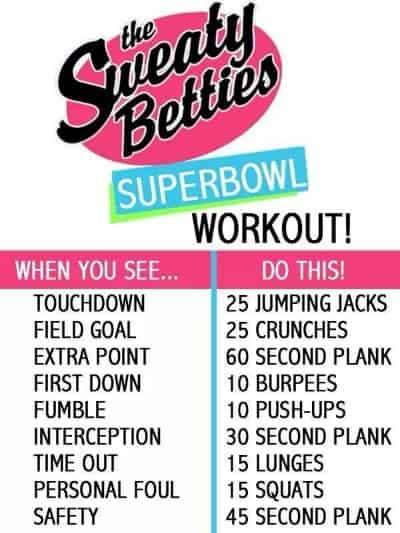 Well, no one would have thought we would begin with a 45 second plank...but then the burpees began. Have you ever done burpees on hard wood?  I do not recommend it. Ever.  By the third first down my hands were starting to bruise. The first quarter was relatively painless except for that though... for me that is.  The Broncos however...

By the second quarter I was wondering what the heck I was thinking getting in to this. I can tell you that I was SO glad there were 18,000 commercials... because that was when I got to take a break.  (or in some cases - catch up... like when there would be a fumble, touchdown, and extra point all in one play... thanks Manning) You know its bad when you start praying for time outs and personal fouls just to give your arms a break.

The end of the second quarter I was feeling great. And you know what the end of the second quarter means.... HALFTIME!! (Read: 20 minute break!!)  I was breathing heavy and sweating like a fool, so I sat down on the couch and watched Bruno Mars and Red Hot Chili Peppers rock the stage. And they did. However, it wasnt long before the boys were back on the field... and the first downs began again... a lot of them...

My original goal was just to survive the first half... but I felt great after half time so I jumped back in - literally - with jumping jacks and burpees. This was when it dawned on me that a 20 minute break in the middle of a workout like this is NOT such a great idea. I am not sure what was hurting worse - my legs or my arms.  However, I powered through... sounding a bit like a pirate every time someone got a first down.

Somehow I managed to finish the entire thing.  By the end of the third quarter, the girls were in bed, Dad had gone home, and Mike was back in the bedroom, so I was left alone in the living room to continue my challenge. (which is probably good... your children should never hear you curse like that...)  I had people cheering me on both on Facebook and Instagram, which helped me push through my aching shoulders and bruised hands. I even had a few friends doing it with me... texting back and forth "damn is that another first down!?" "someone get a touchdown - my arms need a rest!" " if I have to do one more set of burpees..." The good news though was it kept me from eating one single bite of junk food or drinking a drop of alcohol.  I call that a win.

It felt amazing to achieve it, and honestly, it made me wish there were more football games so I could attempt this for every game.  Can you imagine how fit you would be after doing this a few times a week for 15 weeks?!

Thank you to the Sweaty Betties for putting this challenge together and to everyone who cheered me on.  Maybe we can do a challenge for the upcoming Olympics? Or March Madness? Or... baseball!?