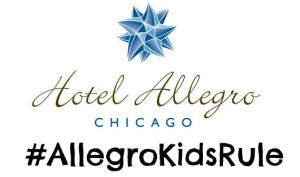 On Wordless Wednesday a few weeks ago I announced that the Tween (Teen in 8 days! Yikes!) and I were heading off to a weekend in Chicago courtesy of Kimpton Hotels to check out all the things there is to do with kiddos in the beautiful city of Chicago.  On my Life List #26 is to Have dinner in Chicago with someone who is actually WORTH being in Chicago with... I am excited to mark that one as DONE!

Our trip actually began Thursday when we hit the road at 5:30am to drive to Atlanta to my mother's house.  The flights were much better - timing and direct flights, plus I was going to have to layover in Atlanta anyway, better to just go there and enjoy it.  We arrived shortly after lunch time and spent the entire afternoon floating around in the pool.  Talk about the perfect start to the weekend. 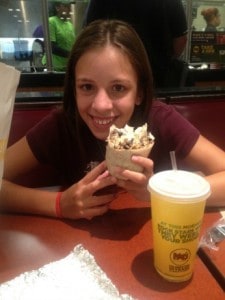 Friday we had to wake up at 4:30 in order to get on the road to the airport before the Atlanta Traffic set it.  It got us there a few hours before our flight, but that was ok - we found a Moe's and were delighted to find out they serve Homewreckers ... even at 6am.

The flight was perfect and even though the Tween had some anxiety about take off, she did fine once we got in the air.  She has flown before but as a toddler, so she really doesn't remember.

We arrived in Chicago and got our bags - and then the fun really began.  Now, I have heard stories about taxi drivers in New York... but I can not imagine them being any worse than in Chicago.  Our driver was very nice, and actually a very talented driver - I told him he should try out for Nascar...or to be a stunt driver.  He asked if it was ok to take "back roads" which I laughed about, thinking that "back roads" where I am from are seldom even paved...

We arrived at the Hotel Allegro and were absolutely famished, so we quickly checked in and headed to our room to put our stuff down and find some food!   The room was AWESOME.  The Hotel Allegro was originally built in 1926 and is located right inside "The Loop" so an easy walk to anything (wait till you see Day 2 and my 19,000+ steps) or you can literally step right outside to grab the train.   The colors were silver and blue and had kind of a 70s feel to the decor and the Tween loved the enormous picture of a violin hanging on the wall. 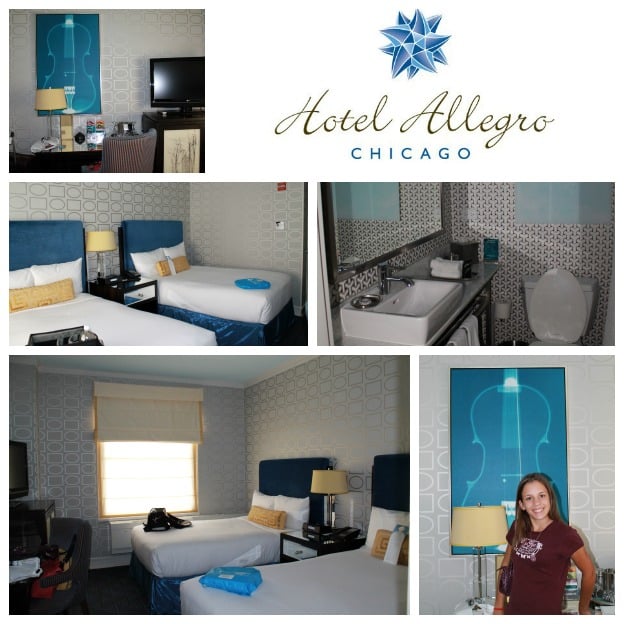 After we checked in we headed to lunch just the two of us at the Encore Liquid Lounge which you can get to from the lobby of the hotel.  The food was unbelievably good - they had amazing Ranch dressing... that made this Southern girl a very happy camper - and we had plenty to save for a snack later.

After a bit of relaxing in the room we got cleaned up and headed down for Kids Hour which starts at 4pm right in the hotel lobby.  They have fun games, puzzles, a Wii, an old timey Popcorn stand... it was terrific.  I got to meet the other Moms - Casey from MooshInIndy, Erin from MommyOnTheSpot, Alison from SassyMomsInTheCity,  and Colleen from MommyDaze.   We chatted while the kids played, all a bit tired from the travel, so we retired early to our rooms where we found a delightful surprise - Cookies and Milk! 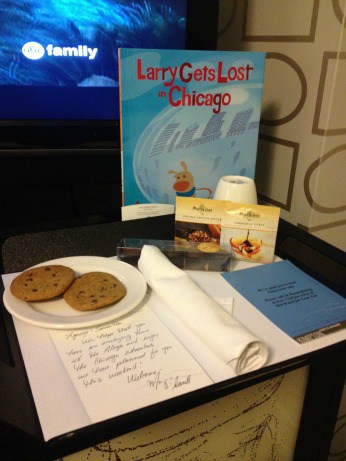 The rest of the evening was spent watching movies... well... that is until about 9pm when we got hungry again.  So what are two girls who are already in their PJs in a city they do not know supposed to do to eat....?!! ROOM SERVICE!! 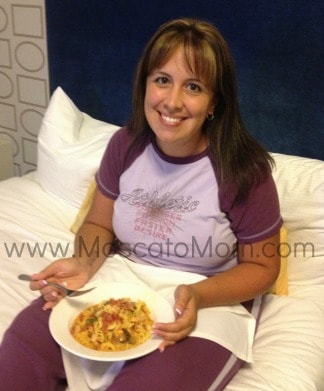