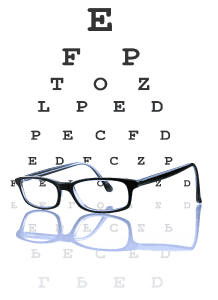 A few weeks ago the Health Department came in to do a health screening of the kiddos going into Kindergarten this year.  The Toddler's scores came back great in everything except eyesight.  The notes said that she failed the exam... with BOTH eyes.   It was just last year that I failed an eye exam myself, and have been sporting some cute little lenses ever since, so I knew it wasn't something to wait around on, and promptly took her to the eye doctor.

The doctor was great - the Toddler was very happy to be the center of attention during the exams (she is her mother's child after all) but when it came down to reading the letters on the eye exam board, her mood shifted.  She started getting upset and frustrated.  As did I.

It has to be one of the hardest feelings in the world to have your "baby" sitting on your lap struggling.  I of course could see the letters just fine - but she had trouble with nearly all of them.  My heart was breaking as I was thinking in my head "EEEEE baby!!  It's an EEEE!!" and she would say... "ummm, a B... or D...I don't know" Turned out that even then, the doc said he didn't think her eyesight was bad enough to require a prescription.

The doc asked if it was ok to dilate her eyes - which meant we had to stay there about an hour.  I was fine with it, wanting to make sure to get the right script for her if needed.  We played in the waiting room and the more relaxed her eye muscles got, the more and more her lazy eye appeared, putting me into a near meltdown.  I tried not to freak the Toddler out as she kept saying she didn't like how her eyes felt, and was ready to get "unstuck" now.

Finally, after what seemed like an eternity, we were called back to repeat the eye exams.   This time she struggled so much more that I did shed a tear.  The nurse saw and understood.  She reached out and patted my hand. I managed to pull it together before the Toddler saw, and laughed with her as I held her on my lap, so thankful that I took her in to get help.

Turns out that the Toddler DOES in fact need eyeglasses, so we skipped down to Eyeglass World to get all fixed up.  She had a ball picking out her own set of lenses, telling the saleswomen she wanted to "look like my mama" 🙂 I think she did great! 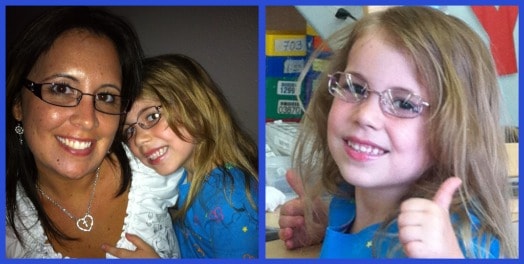 We got two pair for $99 at EyeGlass World and thankfully I purchased the $39 warranty as she bent them on the VERY first day.  But she has now gotten used to them, and even reminds me at least once a day to go put MY glasses on.

If you are a mom of a Toddler - I highly recommend getting your kids eyes examined.  The Toddler never once complained about struggling to see, but now with her glasses, she says often "oh gosh Mom, did you SEE that!?" and I realize that she HAD been struggling, she just never KNEW what she was missing.   I talked to her teacher the next day, and since our appointment, three other little girls in the Toddler's class has gone for an exam and gotten glasses as well.

She loves wearing her glasses, and cleans them all day every day.  Mike said it best when he said to her when she came home "Just when I thought you could not be any cuter..."