When I set a BOLD goal to do 16 races in 2016, the excitement at the beginning got a little overwhelming. When I put that goal out there back in January, several of my SweatSisterz decided they wanted to have the same goal, so I was excited to not be going it alone. After all, I have already finished 12 races in 12 months, Jill did 14 in 2014, and Angie completed fifteen last year - so why not continue the tradition and just keep going!?

We quickly began plotting out our "must do" races - like the McGuire's Run and the Bushwacker Run and of course the Battleship 12k since it was so brutally difficult for us last year (hey - we have a time to beat now!!) but with all of the amazing virtual races available too, it became a frenzy of registrations, signing waivers, and... well, not paying much attention to the actual calendar. Which is how I managed to register for three races... in two days.

The first race was the Double Bridge Run - which my Mom actually ran with me! They added in a finishers medal for the 5kers this year (thank you Joe Zarzaur Law team!!) so we just had to do it. I registered us not really paying any attention to the dates - I just wanted that medal! The morning was absolutely frigid and my mother and I were updating Facebook asking if anyone saw us frozen on the side of the road to please drag us across the finish line. However once we actually got running (after standing outside in the freezing north wind for two and a half hours) we actually warmed up and had a great run. Then we all hung out on the Boardwalk drinking beers and taking pictures - because that is just what you do after a run. It is the only time besides Fat Tuesday where it is perfectly acceptable to have a beer at 9am. 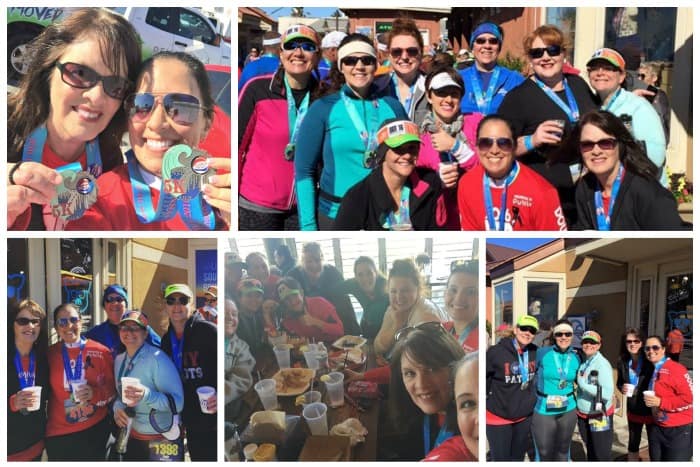 Then later that afternoon there was the Foam Glow out at the Fairgrounds. Yep, same day. We had just enough time to get home and relax (read: get crazy stiff from the morning run) before heading to the Foam Glow. I had registered for that one the very first time I saw it on Facebook - as did several other Sisterz - again, not paying attention to the exact date to see that it was the same day as the Double Bridge. I remember then saying that I thought it was crazy to have a WET run in February - and prayed that it would be warm... my prayers were not answered. However, like the Double Bridge that morning once we finally got moving we warmed up enough to trot over the finishline - cold, wet, and literally glowing with color. Although the party was still hoppin when we crossed the finish line, we were entirely too wet and too cold to join in, so instead we headed off to Rio Bravo for margaritas... you know, to rehydrate. 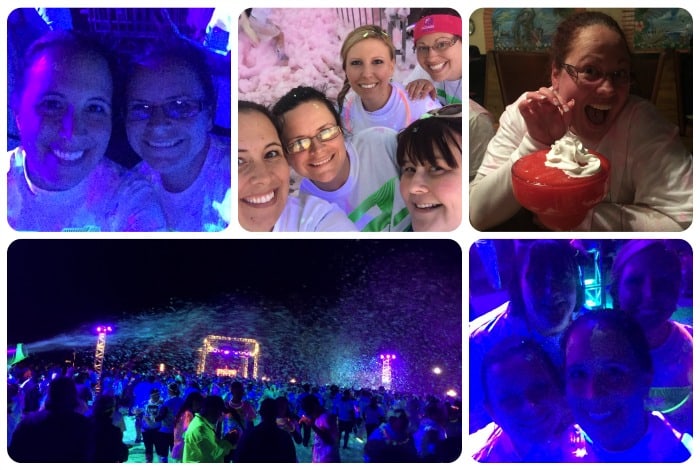 The final race of the weekend was Sunday morning and we opted to do this one inside on the treadmills instead of freezing yet again and almost ensuring we all got the flu. I absolutely love running virtual races with GoneForARun.com and their Valentine's Day Love 2 Run medal I just HAD to have so even though that one was the same weekend as the other two - we did it anyway, calling it our "active recovery" day from the two runs the day before. I will admit - my time was ugly - but I completed it. Then we all spent the rest of the afternoon with our loves (and Eposom Salt) for Valentine's Day.

That weekend marked three runs off of my 16in16 Goal, bringing my total to five completed runs already this year so far with seven more already scheduled. The goal is 16, but honestly, I may surpass that. Especially since looking at GoneForARun they have  just opened up ANOTHER super cute run with a great medal! I wonder if I can borrow someone's dog to run with. Anyway, it was a great weekend and even though I was super sore and super tired dragging in to teach my class on Monday, I was super proud of myself for completing all three. Next up - Bayou Hills!