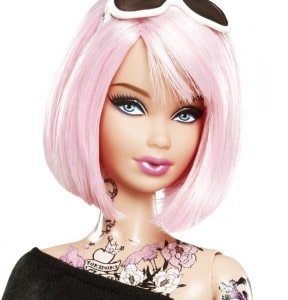 When I saw this on Facebook today, I was shocked.  In a good way.  Tokidoki, Mattel's newest addition to the iconic Barbie Collection, is pretty edgy – sporting pink hair and silver stilettos.  Her “pet” is even a cactus covered pooch named Bastardino.  But what really has people screaming is the fact that Tokidoki is covered in tattoos.

“I don’t think it’s appropriate for little girls to be having Barbies with tattoos all over,” parent Reye Griffith said Thursday. (source)

Tokidoki's upper body is covered in exotic looking tattoos, including large flowers and a crown on her chest and a tiger on her neck.  She also appears to have a Japanese woman on her arm.   Though the tattoos are tasteful (hey, we have all seen worse)  it still has many parents in an uproar.

“I think it sends all the wrong signals for young girls,” said Mitti Hansen, mother to a 4-year-old girl. (source)

Personally I am not opposed to this, as I have a few tattoos myself.  In fact the American Academy of Dermatology reports that 1 in 4 adults ages 18 to 50 have at least one.   And I love my tattoos and hate that society still gawks at them as taboo.   As a mother of two daughters, I would not mind if once my daughters are of legal age (as in 18) chose to get a tattoo.   Mine tell the story of my life, in the art form that I chose to express it.

Tokidoki is considered a collectible and will not be found in stores.  She retails for $50 – much more than most Barbies – and is a Limited Edition, and is being marketed more to the adult collectors than to children.  I just looked – she is already SOLD OUT!

I have never… ever owned a Barbie and I would LOVE to get my hands on one of these.  I think she is beautiful, and I am proud of Mattel for being willing to push the envelope a bit, and show that tattoos do not have to be taboo, and can in fact be beautiful.   Maybe someday Mattel will make a Barbie a bit more anatomically correct… but until then, Tokidoki will be my favorite.

What do you think?  Has Mattel gone too far?