I have always been a fan of ABC's Bachelor/Bachelorette series since it began in 2002.  Though I am not a big fan of people humiliating themselves on National Television (I won't watch the try outs for American Idol lol)  I do love the romantic side of the ABC series, and love seeing all of the beautiful places and fun trips they go on. Occasionally my Tween will have "nothing better to do" and will share a bowl of popcorn while we watch every Monday night.

Every year has had a scandal - from contestants getting the hots for the camera men to women still trying to "win" even with boyfriends at home - but this season of The Bachelorette has been quite the learning experience for my dear little Tween.  In seasons prior she has only watched when there was "nothing else on" or "none of her friends were online."  (insert eye roll) But this year as she is starting to like the idea of a "boyfriend" she is watching a bit more intently and asking questions about the whole "dating game." 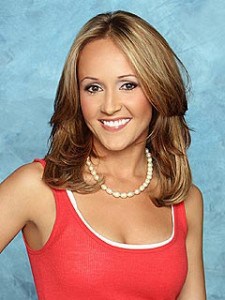 This season of The Bachelorette features last seasons cast off - Ashley Hebert - looking for love in 25 eligible Bachelors.  From the very beginning, one Bachelor - Bentley Williams - has stood out as a villian.  To keep it brief - Ashley was warned before the show even began that Bentley was not going on the show for the right reasons.  A "friend of a friend" knows Bentley's ex-wife, and warned Ashley that Bentley just "wasnt that into her" and was only going on the show to try to "advertise his business."  Ashley, however, wanting to give him the benefit of the doubt, set her eyes on Bentley and admittedly fell in love from him from the very beginning.  The Tween and I would throw popcorn at the screen every time she would talk about Bentley (the chihuahua loved it!) and asked him again and again to "accept this rose" and stay on the show another week.

The Tween was just disgusted at this whole ordeal, and I used it as an opportunity to really talk to her about dating, and how even when the girl has the best of intentions, she can still look like a complete desperate fool.  (Sorry Ashley, we still love you.) As a mother of a Tween daughter - who does not have a sparkling dating history myself (took me 28 years to get it right!!)- I have tried endlessly to teach her how to not "lose" herself in a relationship, and how it is better to be alone and happy than miserable and linked up.  She has fought me on my rule of not letting her call boys (the BOYS are the ones who are supposed to do the calling, chivalry is NOT dead!) and that unless it is a Sadie Hawkins Dance, she will go solo before asking the boy for the date.

It has also done a great job in showing how some men can seem one way, and be completely different way in reality.  We have talked about how we get "blinded by love" and how we only choose to see what we WANT to see, not what is true reality and what everyone ELSE sees.   The Tween has said over and over "he doesn't even SEEM like he is that in to her when they are together! Why is she so crazy about him!?!" But haven't we all had a friend (or even ourselves) in this exact same scenario?

The Bachelorette has surely made Bentley out to be a bigger villian than he really is (though maybe not much as they sure have had plenty of footage to work with), and I do hate it for Ashley that her heart is aching and she is being made to look like such a fool on National Television, but I am really grateful that it has played out the way that it has, and that my Tween daughter now sees the importance of self confidence and how truly unattractive NEEDINESS is.  Last week she said "Jeez Mom, she is like BEGGING him to stay... who would even WANT her after that!?" Ahhhh it was a proud Mommy moment.

Rumor has it that Bentley comes back, but there are no details on how he is eliminated or leaves again - but it has been confirmed that Ashley does not end up with him, and does find her "Happily Ever After" (for right now) so I am excited to let The Tween see it all play out.

At the end of the show last week she said "Gosh, dating is hard... I dont get why people want to do it so young.  I would rather go get a pedicure with my girlfriends on a Friday night." Thanks for that ABC.