But none of those are true.

According to StatisticBrain.com, there are over 160,000 fast food restaurants serving 50 million Americans each day, to the tune of some $110 billion in annual revenue.   44% of Americans admit to eating fast food at least once a week, while 6% say they eat fast food daily.  So with all of this fast food consumption, how is it possible that there has been a drop in the statistics for daily caloric intake from fast food?  A recent study by the Center for Disease Control released their findings that on average, adults consumed about 11.3 percent of their daily calorie intake from fast food in the 2007-2010 period – a drop from 12.8 percent in 2003-2006.   How is that even possible?

Last week I had the privilege of getting that very question answered while touring the Wendy's Headquarters in Columbus, Ohio.  Surrounded by fellow bloggers as well as Registered Dietitians and Nutritionists, I got to see first hand the steps Wendy's is making towards offering healthier alternatives for fast food.

Since 1979, Wendy's has been leading the fast food industry towards healthier alternatives with the first salad bar being introduced in their restaurants which included a wide variety of fresh fruits and vegetables - a vast change from the usual "burgers and fries."   In 1983 they added baked potatoes on their menu - a healthier alternative to french fries.   In 1992 they began offering Fresh Salads to Go - giving even the busiest of people no excuse for not eating right while in a hurry - and in 2002 they added Garden Sensations to their menu - gourmet salads including nutritious toppings like grilled chicken to create a full meal.

And that is just the highlights.

Truth is Wendy's has been making changes to their menu to encourage healthier eating every year since 1979.  And with their latest release - the My Wendy's Nutrition App - they are putting the knowledge and power to choose right into their customers hands. 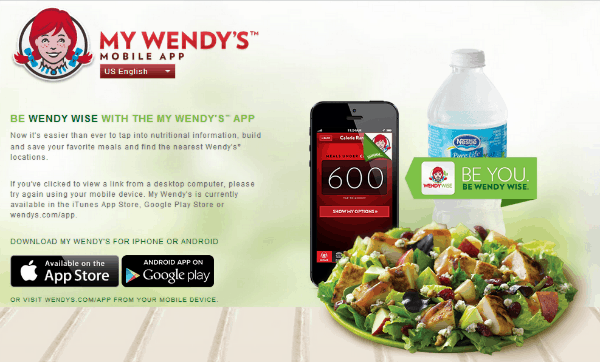 Now let me back up because in just the 26 hours that I was in the city of Columbus, I learned so much and experienced so much that it is difficult to even put into one post.  And let me also say, this is not a post that says "Fast Food is now as healthy as what you can make at home."  That is never going to be the case.  Ever.  Nothing can ever compare to fresh, home cooked, organic meals from your own kitchen.  And in a perfect world, we would all have the opportunity to eat that way 100% of the time.    But that isnt reality.

While at Wendy's we had the opportunity to try their new Flatbread Grilled Chicken Sandwiches - admittedly something I would *never* have ordered on my own.  For one, you all know my weirdness about meat, and "flatbread" and "cardboard" have the same amount of letters.  However I did not want to be a complainer, so I manned up and tasted the new sandwich - the Smoky Honey Mustard variety.  I loved it.  I didn't even pick the tomatoes off.  In fact, I came home on Sunday and went to Wendy's for lunch on Monday just to make Mike try it.  Even he liked it.  And to really blow your mind... it's only 370 calories. 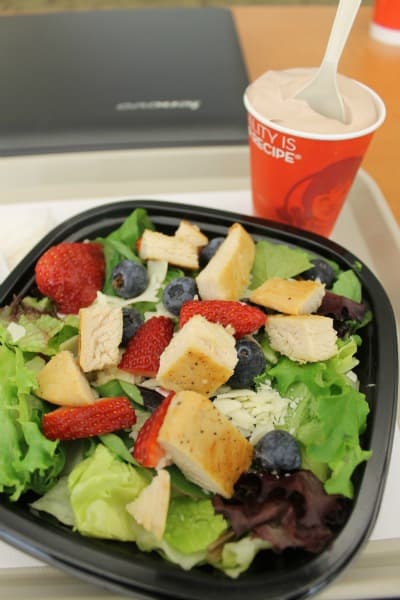 Other tasty treats we got to try - the Berry Almond Chicken Salad - their first seasonal salad which will be available starting in May.   We were served the "half" size - which was more than enough for an entire meal - and a refreshing change to get to cut something in half instead of "super sizing" to the amount large enough that only a horse should consume.  Fresh strawberries, blueberries, grilled chicken, and toasted almonds made it filling and tasty - and I did not even put the dressing on it.  Goes great with a Frosty by the way.

It was an amazing and eye opening experience to see the "behind the scenes" of a multimillion dollar fast food chain and learn what it takes to take a meal from conception to fruition - with everything from tasting panels to produce supply to marketing campaigns.   It was even more amazing to do so alongside some of the top nutritionists in the country - all of whom were equally as impressed and supportive of Wendy's mission to offer healthier alternatives on their menu.

Nothing will ever replace the meals you can cook at home, but I am very proud to see a company that is putting so much time effort, and money into trying to offer the healthiest alternatives out there for when reality kicks in, and you just simply need something fast.  Well done, Wendy's.

*I participated in this event as part of a campaign with Ketchum PR.  No compensation was received for this post and all opinions are 100% my own.