When Mike and I decided to celebrate our Anniversary in Las Vegas this year, I was stoked.  Every time I have been before it has been for a Convention or Seminar, so I was always scheduled out every day with stuff to do.  This trip I decided to "go it alone" with no schedule and in typical Lynsey fashion, my trip was the epitome of Murphy's Law.  By the third day I had gotten a sense of humor about all of the shortcomings and decided since this may be my last trip to Vegas (I'd rather be laying on a beach somewhere), I was going to enjoy every second of it, regardless.

There are literally thousands of blog posts for the "Things To Do In Vegas"... but not many warning you what not to do. THIS post is all of the "Not's." 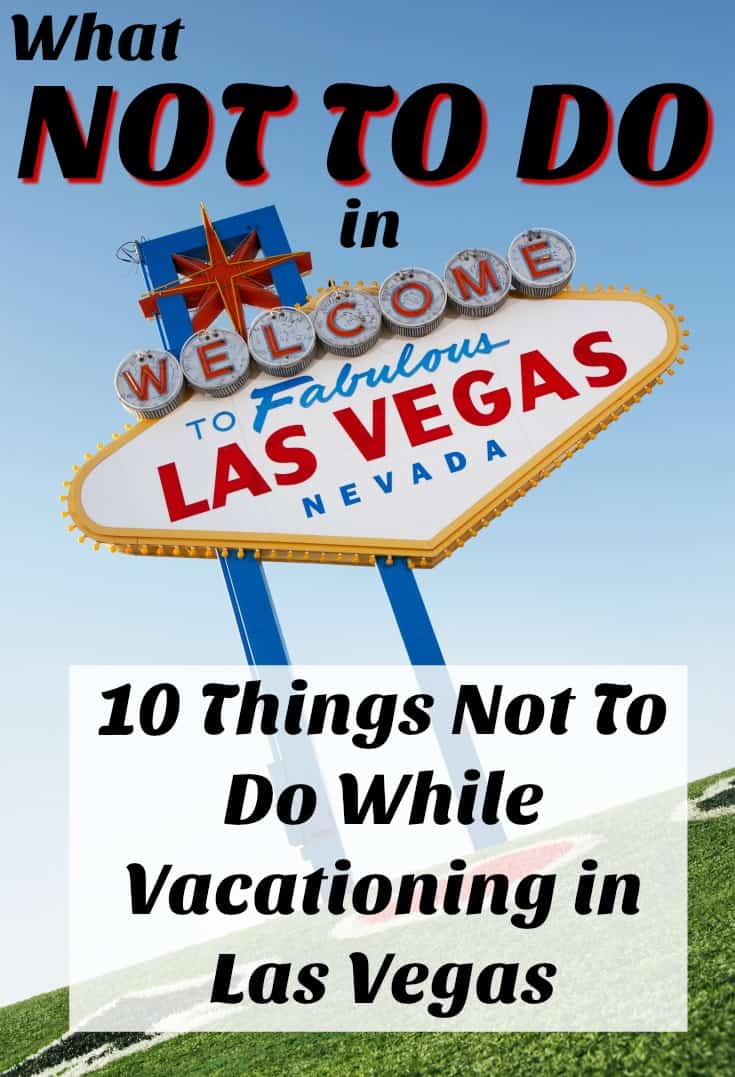 Do NOT book a flight without assigned seating. Or at least if you do, set a reminder to check in. This was my first flight ever where I did not have an assigned seat, and while I liked not having to pay for a bag, I hated having to "find" a place to sit. Everyone is super excited to go to Vegas - and often the partying starts on the flight... which is fine..unless you are separated from your people and suddenly in the middle of someone else's debauchery. Now this one may be my fault - it was the first time I had used this airline - but it was just the start of what was to be a crazy vacation.

Do NOT book a room without looking at a map...and a room layout.  When we were looking for packages to fly to Vegas, we found a great deal at a great hotel. I remember saying "the hotel doesn't matter - we won't be in the room much anyways".... boy was I wrong. The Rooms were about a half a mile walk (I'm not kidding) from the Hotel Lobby - which proved to be quite a problem as you will read in a moment. But the bigger problem was with the room itself. Besides being smaller than a college dorm room, there was no separation between the bathroom and the bedroom... meaning anything you did either location was loudly heard throughout the room. Now I love Mike with all of my heart... but I still don't want to feel like I am in the bathroom WITH him... that's a little too close.

Do NOT put your room key near your cell phone. Now, this may be a no-brainer for some, but you would think that someone who stays in hotels as much as I do would know this rule. Apparently, your cell phone can demagnetize your room key when kept in close proximity of one another. Since all I carried all weekend was my Pami Pocket, I managed to demagnetize my keys over...and over... and over. Remember me telling you that the lobby was about a half a mile from my room? Yeah, well, on my fourth trip down for a new key, that is when I learned the little cell phone trick.

Do NOT go see Kevin Lepine: Hypnosis Unleashed. Our first night there, the guys went to play poker, leaving us girls to our own devices to find something to do. Looking for something close we chose to cross the street for the Kevin Lepine Hypnosis show at the Hooters Casino.  We should have known it was going to be bad when A - we were seated in the front row, B - only about 25 people showed up to the show at all, and C - they not only pulled us up on stage but would not let us sit together.  The next hour was filled with crude, obnoxious behavior from an overly pompous Kevin Lepine while we were "hypnotized" to do what he said.  After the show, all of us who were "hypnotized" enjoyed a drink while talking about what an enormous scam that was and laughing that none of us had the guts to call the guy out that we were all faking it.  To make matters even worse, we were all exhausted from trying to "relax" and actually BE hypnotized, so the night ended with an early bedtime shortly after the show. So much for partying the first night there.

Do NOT be without chap stick and lotion. Las Vegas is crazy dry. Maybe because I live in Florida I am used to so much humidity you can literally feel the air, but still. Between just the atmosphere and the insane amount of walking that it takes to get anywhere, your skin and lips will get seriously dried out. In four days I went through nearly an entire tube of Burt's Bees and about eight little travel bottles of lotion... but my hair looked fantastic!

Do NOT only drink booze. For the same reason you need lip balm - you need water. And lots of it. By the third night there, Liz and I were both battling major dehydration to the point that Liz left a show early to go lie down. Now, to be fair, we did drink several cocktails each day, but never enough to get "drunk" and certainly not enough to warrant a hangover. However, I drank a lot more water than Liz (I don't drink any kind of soda and they do not have real tea, so my only real option besides booze was bottled water) and I fared better than she did with staying somewhat hydrated. Water is about $6 per bottle... and worth every penny.

Do NOT go without a plan. Most of my vacation was spent aimlessly walking, looking for something to do. I wanted a break from my "time management" routine of having everything scheduled... and that totally backfired. The truth is Vegas is incredibly boring during the day - especially when it is cold outside. (I guess you are supposed to party all night so you sleep all day....?) There is only one show that begins before 7pm and it got horrible reviews. (Although Kevin Lepine got good reviews, so maybe the comedy show would have been great) None of us have any desire or get a thrill out of shooting a gun, learning about the Mob, or driving a car too fast... especially since we can do all of that right here at home. The other two couples went to the CSI: The Experience - one saying it was great and the other saying it was lame. We wanted to go see the Secret Gardens at the Mirage but it was absolutely freezing and crazy windy. There is indoor skydiving which sounded fun... until we saw that it is $80 for 15 minutes. Nothing can be THAT fun.

Do NOT expect great food. Probably the biggest disappointment of the weekend was with the food. From Emeril to Gordon Ramsey, we spent a little over $400 in food over three days, and the absolute best meal came from a sports bar in New York New York. We ate Italian, Mexican, and American all hoping to be "WOWed" and it never happened - even when paying nearly $100 for just the two of us to eat. As much as I love going out to eat, I was wishing for a grocery store and a kitchenette by the second day.

Do NOT MISS Brad Garrett's Comedy Club. The absolute highlight of the weekend was the comedy show on Friday night. On a whim, we decided to race down to the Brad Garrett Comedy Club which is inside MGM where we got to see several comedians, including Rondell Sheridan who had me laughing so hard I was wiping tears from my eyes most of the show. I wished there were more shows and more comedians like that, as I would have spent all day and every penny I had to laugh that hard.

Now, just because I have listed the "nots" here, does not at all mean I didn't have a wonderful time. We have a lot of "DOs" as well - including catching Zumanity - a steamy Cirque du Soliel show - and indulging in an enormous slice of pizza from New York New York. And if you are going to drink, it is totally worth finding a Fat Tuesdays to buy a souvenir cup with discounted refills... whether refilling with water or wine. Having a cup with a handle that is "spillproof" will come in handy when battling through the crowds. The monorail is absolutely the best way to get around and for $12 a day it beats any taxi fare. And shopping till you drop takes on a whole new meaning between Caesar's Palace Forum Shops and the Venetian Palazzo.

I don't know if I will ever go back to Vegas without there being a conference or event. This was my sixth trip there and has kind of a "been there, done that" feel to it now. Mike is going back in June with his poker buddies to play some of the WSOP Events... I think it's a great time for us girls to go on a cruise.