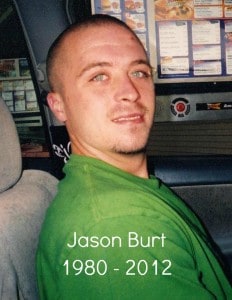 When I was nine I went on a Christmas Caroling Hayride around Pensacola with a lady my Dad worked with and her friends and family. It was an unbelievably cold December night in Florida, and while the truck was moving I was absolutely freezing. A boy about my age with brown hair and blue eyes shared his blanket with me and we huddled together on the ride to stay warm. He gave me the majority of the blanket, and I am sure he half froze to death, but we shared and laughed driving around town singing Christmas Carols.

A few years later, when my parents divorced, the lady my Dad worked with became like a second mother to me. My Mom took a job in another state and I stayed with Dad, but Wanda stepped in to help get me to and from school, make sure dinner was cooked, and make sure my homework was done. She began taking me with her to family functions and events, and her entire family - including Jason, the boy with brown hair and blue eyes - welcomed me in with no hesitation as part of their family.

I remember Summer afternoons spent playing as kids. Since I had no siblings, I was excited to have my new "cousins" - Jason, Jeremy, David, Doc, and Randy. Jason and I would be "Mom and Dad" and Doc was our "Son." We were probably 11. Doc was about 3. Jason let me boss him around, let his "real" cousins poke fun at him for being "married." He didnt mind, and he would laugh and smile.

Jason and I were always the closest in our newly knit family. We took family vacations together - the most memorable was going to his great grandmothers in Louisiana where we played from sun up to sun down in the river - and then scared each other with ghost stories in the cemetery at night. He would hold my hand on the way back to make sure I didnt fall - or get eaten by zombies.  He taught me how to shoot a gun, and how to play pool - he even let me win in front of his friends.  He had no problem being "beaten by a girl."

When the hurricanes hit when I was 15, my Dad and I lost our home. We moved in with Wanda and her husband Steve while our house was being repaired, but another hurricane quickly took that idea right out from under us. After losing my home I remember feeling lost. Wanda's family - our new family - was always there for us. They were there for every holiday, every birthday, every meltdown (I was a teen girl - I had a lot) every milestone - they were always there. We were family.

While we were in high school I remember many many nights watching Jason play baseball. Even though I groaned about going many nights, I always had a fantastic time once I got there. I would help Jeanine in the concession stand, and a few times she tried to teach me how to keep the books in the press box, but mostly we just cheered for Jason, who was arguably the best pitcher to ever take the mound at Brent Ball Park. His brother Jeremy played as well - the both of them were always a force to be reckoned with - both on and off the baseball field. If anyone ever messed with me or Jeremy, they would have to deal with Jason, even though Jason would get in trouble for it later.

The year we turned 21 we spent New Year's Eve together. Not at a bar or club, but in a park, talking - an oath of sobriety between us. Both Jason and I had spent our teenage years testing the limits and making mistakes that we regretted. We sat in the park on swings just talking about where we had been and where we wanted to go. I wanted a career and fame and fortune. Jason wanted a family.

In the years since then we have both gotten what we dreamed of - Jason with a wife and two daughters and a stepson he loved like his own. I built my business and became a success and was lucky enough to have a family of my own as well. We got caught up in life and grew apart, but still saw each other at every holiday and event, and an occasional night out.

This past Christmas, as we all gathered in Wanda's home, we sat and talked for what seemed like hours. We talked about growing up, how we all have families of our own now. We laughed about me carrying Doc around - I think he is a full foot taller than I am now.  We laughed and hugged, and promised we would keep in better touch as we said our goodbyes.

Saturday night - after a long day of exploring Chicago and a night of playing on the Navy Pier I received the news. My uncle had been watching my Facebook checkins, waiting for me to get back to the hotel - not wanting to ruin our night at the Pier. I sat in the bathroom - trying not to wake Samantha as I tried to wrap my brain around a world with no Jason.

It has been three days and I think I am still in shock. I came home and have talked to everyone on the phone and Facebook, but I have yet to go to his house - I am not sure I am ready for that yet. I feel like I am on a roller coaster - fine one minute, sobbing the next, and then I will get a flash of anger.  I can not understand why God took Jason from us all, and why we will never get to live out all of those dreams we set out for many years ago.

I will hold all of our memories dear to my heart, and though I will never understand why he is gone, I do have peace that Jason was Saved, and I will see him again.  Jason and I were not related by marriage or by blood, but we were - and always will be - family.

Rest in Peace Jason, you will forever be missed.