The whole time I was walking through the Halloween Horror Nights in Orlando I was wondering what the heck I had gotten myself in to. I am such a scaredy cat - I send The Teen to movies with Mike when I am worried they might be scary. Yes, she is 15 and less of a coward than her mother. Don't judge. I think pretty much the only thing that helped me make it through (besides the death grip I had on Mickey's right arm while I was nestled in between Summer's shoulder blades) was the promise of a full day at Universal Orlando Islands of Adventure Theme Park the next day. 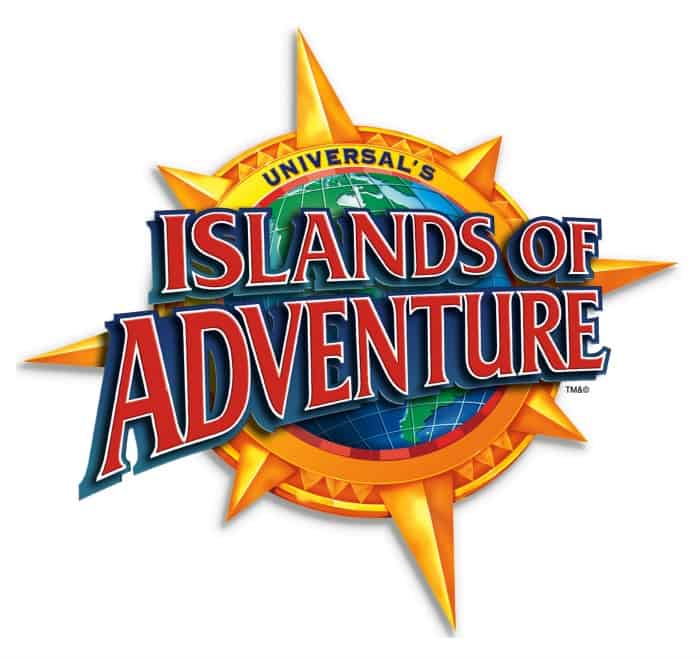 I haven't been to Universal in years... like... since Back to the Future ride was still cool. (Didn't I say no judging? Stopit.) And man have things changed. Now, I of course got to scope out a few things while I was walking through Halloween Horror Nights, but since you know that it was seldom that I actually had my eyes OPEN it felt like the first time. I was super excited to ride the Hollywood Rip Ride RockIt - their newest roller coaster that lets you jam out to your favorite tunes while zooming through the air at 65 miles an hour. I chose Evanescence "Bring Me To Life" for my song - HOLYWOW. The tune is timed *perfectly* with the coaster - it was absolutely amazing. I could have ridden that one over and over and over. It was as incredible as it sounds - times a thousand. 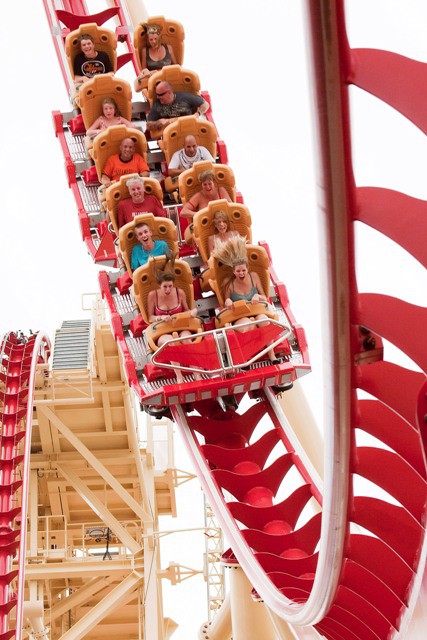 I was literally vibrating getting off of that ride. I felt like I was 10 again - wanting to run back to get in line and ride it again and again. But instead we headed off to the Despicable Me Minion Mayhem ride to give our adrenaline a break. This ride was absolutely the cutest - I wished for Midge the entire time. She loves the Minions and I laughed and laughed on this fun 3D motion ride. 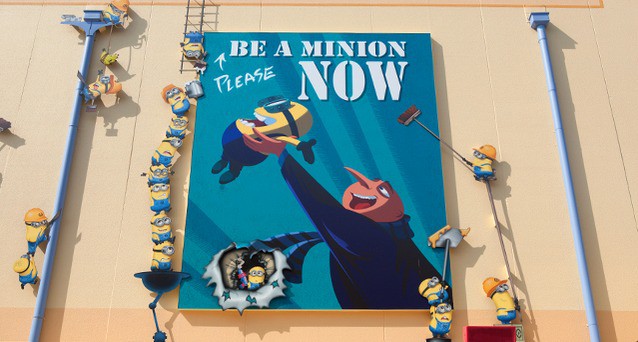 After those two it was kind of a whirlwind - Transformers and Spiderman and  even the High in the Sky Seuss Trolley Train Ride. We even stopped to have lunch at Mythos - a gorgeous restaurant right in the park that had the absolute best Spanikopita ever. I could have easily eaten three plates of just this and called it a day. 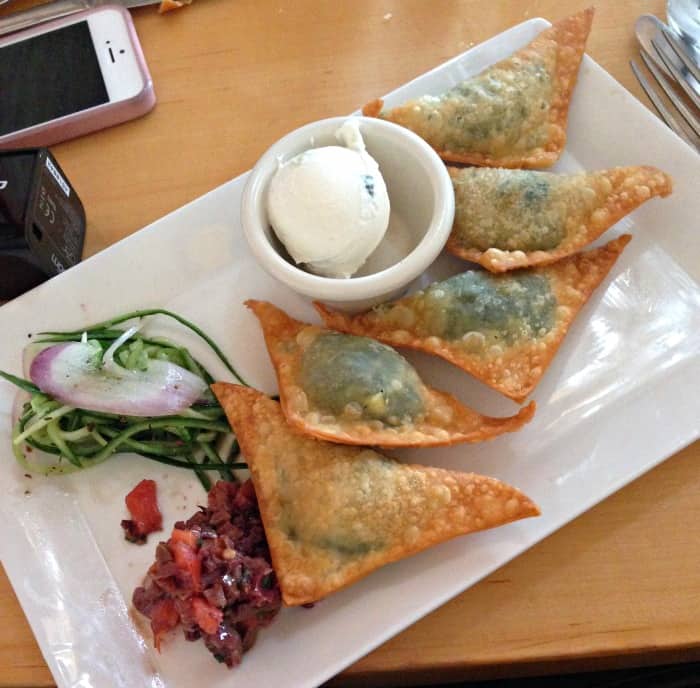 But then... I saw this and suddenly my adrenaline was rushing again. 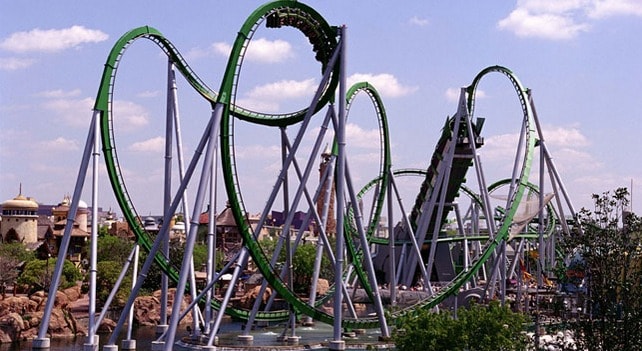 Meredith asked who had never been on The Incredible Hulk Roller Coaster and before I could even think - I raised my hand.... and she promptly grabbed it to put me in the front row. My first thought was Oh %#@#$%@$! But I strapped in, sat back and OHMYGOSH. Honestly I am not sure which one was my favorite - Hollywood Rip Ride RockIt or The Incredible Hulk. Both of them were absolutely awesome. There is a "surprise" with the Hulk that I will not give away - but it is an absolute MUST RIDE when you go to Islands of Adventure. My Teen would LOVE this one.

The last ride we went on was the Jurassic Park River Adventure. This was the ride I wished for Mike on - he absolutely loves Jurassic Park. And I am super stoked to learn that they are actually coming out with a new Jurassic Park movie - you can bet we will be standing at the doors on opening night for that one. The ride was great - our guide gave up all parkas and said we "might get wet." Seriously? Seriously. By "wet" he apparently meant "soaked." I even tucked my parka behind my ears the way I was told to... yeah, didn't matter. Soaked. But we all just laughed at how ridiculous we all looked - I think "drowned rat" was the term I used. 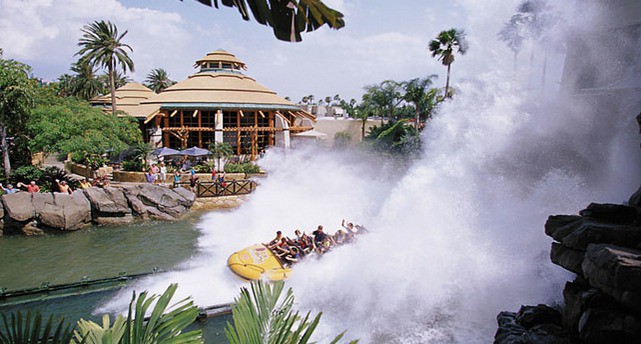 The rest of the day was spent checking out all of the Harry Potter stuff and Diagon Alley. This is the part where I have to admit that I have never read the books and do not know the first thing about Harry Potter. I wish I could have captured the look on the other bloggers faces when I said "isn't it a story of some gold rings or something." Yes, I am that girl. (There you go judging again...) But even knowing nothing about the movies (which, by the way, have absolutely zero to do with rings - that's a whole 'nother movie series) it was really cool to walk through and see all of the details they had put in to this section of the Park. I said with Halloween Horror Nights that it is clear that Universal Orlando does not cut corners anywhere. Everything you see, touch, and hear is to the absolute extreme.

We headed back to the Cabana Bay Beach Resort to get cleaned up and head out for a night at CityWalk to end our fabulous vacation. The day was perfect at the Islands of Adventure and I can not wait to go back and take my family (and eat three plates of Spanikopita).

Thank you again to the Two Traveling Moms for putting this amazing trip together. It was all absolutely perfect.

*My admission to the park was covered as part of the FacingFearsTogether event.